Where (And Where Not) to Eat Non-Roman Food in Rome 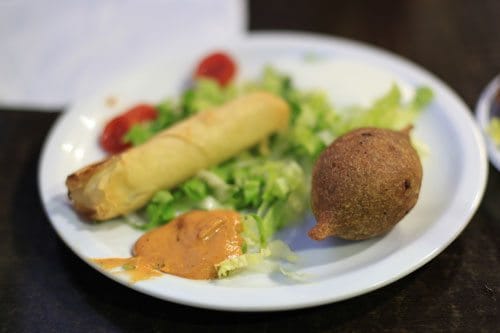 For a city with such a large and varied immigrant population, Rome has relatively few restaurants that serve ethic cuisines, and even fewer that serve authentic food, which hasn’t been watered down for the provincial Roman palate. Thankfully, there are a few venues in Rome that serve excellent food from around the globe. There are many more that serve passable food, and others that are offensive to mouths everywhere. Here are some places I like, and a few I avoid:

Ethiopian food is one of my favorite cuisines, right up there with Italian and Turkish. Nearly a dozen restaurants in Rome serve Ethiopian and Eritrean fare but, in general, I find them bland and disappointing (I’m talking ’bout you Africa). Enqutatash (Viale della Stazione Prenestina, 55; 06-273-767; closed Monday), an Ethiopian restaurant near Stazione Prenestina, is another story. I used to live two blocks from this place when it was a hole in the wall that felt more like a garage than a restaurant and the cook would bring in tupperware containers full of food from home. Now it is a proper restaurant with tablecloths and other modern conveniences. They still serve the same amazing, home cooked, liberally spiced Ethiopian food as before. And they serve Tej, a wine flavored with honey and spices.

Mesob, one of the best restaurants in Rome, sits on the cusp of Pigneto. Owner and chef Kuki Tadese prepares family recipes that are richly spiced and full of flavor. She excels at vegetarian dishes and serves braised vegetables, lentils, split peas and bitter greens that are simmered and stewed to perfection. Among the meat dishes, doro wat (chicken with onions, ginger and spices) and kay tibs (beef with spicy peppers) are standouts. Diners share dishes, which are distributed atop sheets of spongy injera. The service can be slow because Kuki is in the kitchen doing almost everything alone. Everyone that has ever joined me for a meal at Mesob has agreed, it was well worth the wait.

Would you believe me if I told you some of Rome’s tastiest snacks are sold from a shopping bag in front of the Filipino Embassy? There, at Viale delle Medaglie d’Oro 112, a woman sells carefully prepared and neatly packaged Filipino snacks like hopia and ube cake. You can also find hopia at the Mercato Esquilino, but they aren’t quite as satisfying as the Embassy-based version.

In general the doner kebabs in Rome are gross. The mystery meat comes in pre-formed frozen cones manufactured in Germany. Beyond vile. There are very few places, however, that do it right. Ali Babà on Via Carroceto near the Arco di Travertino metro stop is one of them. In a pinch, I’ll grab a doner from the Turkish guys at Istanbul Kebab (Via Giulio Cesare, 126) in Prati. It won’t blow your mind, but if you need a quick fix it will hit the spot.

Il Bananito serves Colombian and Peruvian fast food and juices in a small storefront near Porta Maggiore (at on via di Porta Maggiore 39 to be precise). The tamales aren’t bad, nor are the papas rellenas (potatoes stuffed with meat and olives).

There are a good half-dozen Korean places around Termini. I love Korean food, though concede that I don’t have a very highly developed palate for the cuisine. I’m still at the stage where almost everything tastes good. Therefore, feel free to take this particular paragraph’s advice with a grain of salt. Biwon specializes in gogi gui in which you cook marinated meat at grills on the table. Korean friends have told me it isn’t actually that good. I can say for sure the meat quality isn’t amazing. You be the judge. The bulgogi at Hana is good but outragously expensive. I once had a bulgogi and a beer for €35 and almost fainted when I got the check. It was a big beer, but still. Probably the best place is Gainn north of Termini. If you want to cook Korean at home, there is a well stocked Korean grocery store on Via Cavour 84.

99.9% of Chinese restaurants in Rome are awful. Even the uber famous ones like Sonia Hang Zhou serves food that tastes and reeks of rancid oil. I just gagged thinking about it. Food & Beverage (aka Hong Kong Food & Beverage) near Termini is an exception. If you order from the Italian menu it will be a huge disappointment. Chinese diners are served different dishes. Just look around the dining room for proof. To get the good stuff, point to what crowded tables of families and friends are eating and ask to see the case in the back, which displays daily specials. You will be treated to a pretty good meal…not the best on earth, but probably the best in Rome. And if you order 48 hours in advance, they will make Peking duck.

I am sorry to report that most Mexican and Thai in Rome is inedible. Also burgers are universally terrible.

You can find ingredients from around the globe for sale in the Mercato Esquilino. Whether you are preparing a Mexican feast, a Polish free-for-all, or a Thanksgiving dinner, Mercato Esquilino’s got what you are looking for.

For more info on international dining venues, check out my app Katie Parla’s Rome for Foodies.