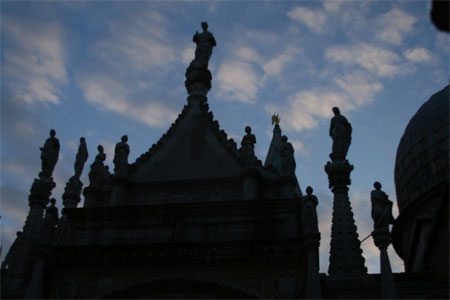 Just thinking about visiting Venice used to make me totally agro. My first few visits to La Serenissima were during high season when the sheer volume of obese cruisers, white tennis shoes, and fanny packs threatened to plunge Venice’s islands into the lagoon forever. A few years ago, I reluctantly visited in the dead of winter and discovered I had completely misjudged the city. Venice is a spectacular place…out of season.

Personally, I will never visit Venice during cruise season (late-March to late-October). The city is too small and its ecosystem is too fragile for tens of thousands of visitors to land each day, have their way with the city for six hours, then retreat onto ships that leave corrosive fumes in their wake. I won’t be a part of it. This is not an arrogant statement as some people may think. It is simply my choice as a traveler to not contribute to the deterioration of a city during the six-months a year it is shameless exploited.

I decided to take a trip to Venice earlier this month for my birthday, just weeks before the unrelenting throngs arrive. We booked a fifty-five square meter apartment in the Ghetto through Cross Polinate for €115 euros a night, quite a bargain considering the location and the ample space. One can also book the place directly for the same price. The apartment was spacious and the kitchen was well-stocked with utensils, posts, and pans. The neighborhood was quiet and within easy walking distance to restaurants and transport connections. It was impossible to get the owners on the phone, but on the up-side, they let us keep our luggage in the apartment until the night of our departure, 6 hours after check-out time.

I cooked a few meals in the apartment after a fruitful outing to the Rialto market where I stocked up on lagoon fish (look for the label “nostrani” to ensure the fish you are purchasing is local) and fresh produce. In mid-March, canocchie (mantis shrimp), moeche, Sant’Erasmus artichokes, and radicchio tardivo are in season.

As much as I enjoyed cooking with local ingredients, we also took advantage of Venice’s amazing restaurants, all of which were in Cannaregio. Highlights included cichetti at La Bottega Ai Promessi Sposi, scallop and artichoke pasta at Anice Stellato, and pesce crudo and frittura mista (tied for best dishes) at Al Fontego dei Pescatori.

I made my first ever trips to the Doge’s Palace and Torcello, both of which were beyond spectacular. I also returned to Burano. We used the twenty-four hour (€18) transport pass for covering Fondamente Nuove-Burano-Torcello-Burano Fondamente Nuove one afternoon and San Marco-San Giorgio-La Giudecca-Zattere the next morning and found it to be worth every euro cent. We didn’t get as much out of the Chorus Pass (€10), as we planned to use it Sunday, only to find out that all but one church was closed that day.

In the end, we had a very productive four days in Venice, though they were not nearly enough to satiate me until cruise season ends. I just don’t know how I can stay away for six months.