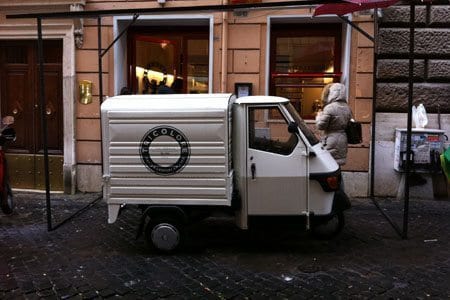 Today I had big plans of eating a light lunch. I figured I would grab a soup and salad at Mia Market so I could indulge in pizza tonight. Of course my plans of healthy dining are always foiled, mostly by my insatiable urge to eat everything. Today’s saboteur was the inauguration of Tricolore, a food emporium/cooking class venue/fancy sandwich shop in Monti. I learned of it quite by accident. On my way to Mia Market, I saw a flyer with Massimo Bottura’s name splashed across it caught my eye. It was an announcement that at 7pm the chef of Osteria Francescana would be the special guest at Tricolore’s inauguration. After wrapping up my dietetic lunch, I walked over to Via Urbana to find out more.

There was a crowd of five or six people in front of the shop eating sandwiches. This was apparently the first lunch service of Tricolore, which officially opened at 9am this morning. I took a look at the laminated menu and obviously the word hamburger jumped out at me. Hmmm…I really should’t, I thought. Screw it, I replied to my gluttonous self as I ordered my second lunch, a rare burger. 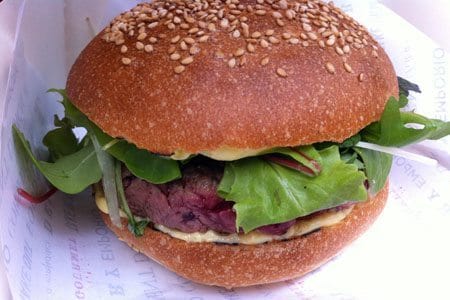 What Tricolore serves is more of an Italian meat patty sandwich than a burger: the bun is not toasted, the beef is La Granda (a Slow Food recognized consortium of razza Piemontese cattle rearers), and it is topped with homemade mayo and field greens. To be fair, the taste of the meat was good, the consistency and flavor of the bread was perfectly engineered to compliment its contents, and the ingredients were top-notch. Yet these are not the characteristics that define a burger for me. 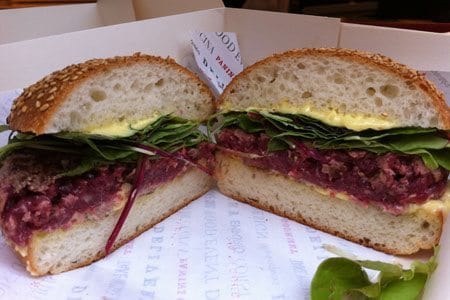 I have already spoken at length about my ideal hamburgers (most recently here and here) and I have a fairly American approach to their construction. I believe the bun should be toasted, the patty should be 15-25% fat, the beef should be Black Angus (short rib, sirloin, and brisket, please!), the grind shouldn’t be too fine or too coarse, the bun should be adapted to the flavor and shape of the patty, and condiments may include ketchup or a strong blue cheese. Oh, and I want my rare burger to leak blood. 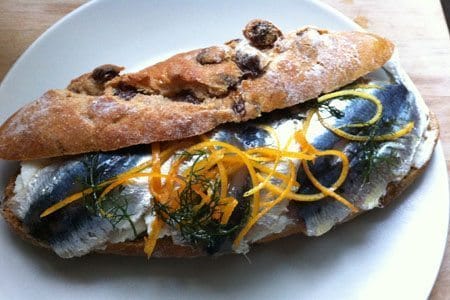 So what you will find at Tricolore is an Italianized version of the great American invention, which is sure to be praised by local gastronomes for its ingredients and taste. (In fact, Elisia Menduni already declared it “absolutely the best burger in Rome” in her post for Papero Giallo that reads like a paid advertisement. I beg to differ.) I think I’ll save €14 euros and pass on it next time, as there are so many other tempting choices on the menu. The other sandwich I tried–does this count as a third lunch or am I still on my second?–sardines, ricotta, candied orange zest, and fennel greens on raisin bread was fantastic. At €10.50 it’s not exactly a steal, but the quality of the ingredients really shines through. And I’m excited to try more of their stellar bread, croissants, and even a cooking class. In the meantime, I’m off to check out the inaugural festivities officiated by the maestro from Modena.

There was spumante and some sandwiches (on an amazing squid ink bread) and Bottura showed up and baptized the kitchen, providing the first cooking class in the place. One of the owners told me that in the next couple of weeks, they will announce future cooking classes, all of which will be taught by famous chefs and bakers (Cristina Bowerman of Glass and Gabriele Bonci of Pizzarium among them). 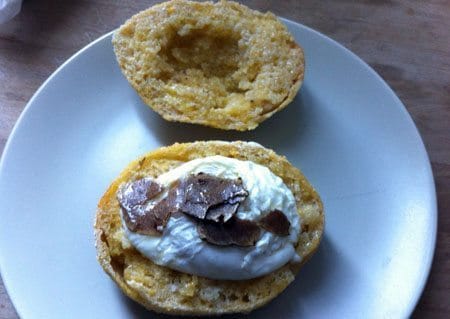 I went back the next day for two more sandwiches: A poached Paolo Parisi egg on a cornbread bun with white truffles for €10.50 and a La Granda hot pocket for €14. The former was microscopic and, I must say, really shocked me with its small size when I opened my take-away box. The latter was kind of awful, as the steak had been wrapped in dough and then the whole thing was cooked together. Some of the dough was still raw. Not a great investment. Still, it was their second day so I can’t be too harsh. But it’s not really acceptable to make such an error in an expensive place billed as a bakery. The 25 minute wait for the two sandwiches I had pre-ordered wasn’t amazing, either. There are major kinks to be worked out at Tricolore but they get a pass until they are a bit more established. 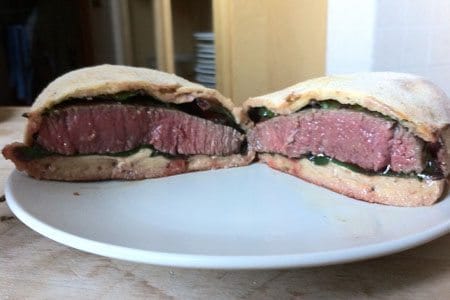 One thing that needs no improvement, however, is the bread. The baking is overseen by Franco Palermo, super genius in the kitchen, Bonci’s mentor, and one of my favorite people on earth. So, while the price of the sandwiches will keep me away most days, I’ll definitely be a regular bread customer. Can’t keep me and carbs apart.