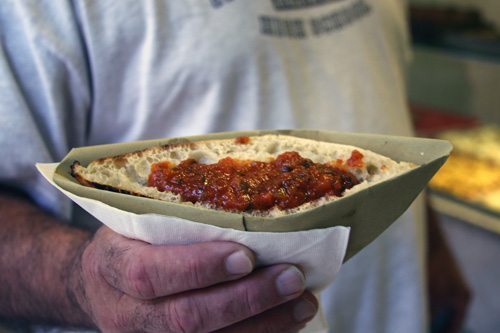 Rome’s rapidly growing trend, “lo street food”, seems unstoppable. I’m not talking about food trucks, which really really don’t work or exist here the way the do in other cities, nor the ubiquitous pizza by the slice joints. I’m referring to a different approach to marketing food in which takeaways, cafes and restaurants peddle (relatively) inexpensive, portable snacks.

Of course, Rome has a long history of pizza by the slice, panini, supplì and other small bites that might be collectively called cibo da strada. But “lo street food” is something else–a new impulse in food production and distribution. Even its English moniker sets it apart from Rome’s established, indigenous models.

While the city’s street food movement is in full swing, even its pioneer is getting in on the action. Stefano Callegari invented the trapizzino at his pizza by the slice joint, 00100, in 2008. 00100 shuttered this past winter and reopened and rebranded under the name Trapizzino, referring to its main offering.

The name trapizzino is a play on words, combining tramezzino (a triangular sandwich served in cafes) and pizza. Unlike the calzone or calzoncino, the bread for a trapizzino is baked separately, then stuffed with the requested filling to order. The fillings are mainly rooted in the Roman classics, but the concept takes cues from other Italian cities where street food culture is strong. “Florence has its many tripe stalls, and Palermo is famous for spleen sandwiches,” Mr. Callegari said. “I think this way of eating tripe and oxtail in Rome can eventually become a local custom like those.”

Back in the days of 00100, the bread was toasted before being filled but now that’s not always the case. This is an unfortunate change. So is the purely industrial beer selection. While the trapizzino experience was a bit better back then, they are still pretty delicious. Fillings are more numerous than ever and Roman classics like tongue in parsley sauce and chicken with bell peppers have been joined by burrata and anchovies and zighini, welcome innovations in the realm of Rome’s OG street food.

More on Trapizzino in The Guardian.