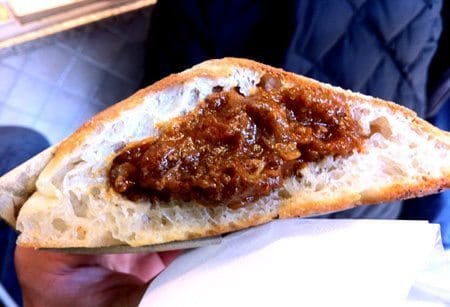 What is the cucina romana? Is it a set of native dishes untouched by time, or a conglomeration of outside influences made with local ingredients? I think everyone can agree it is the latter. After all, if Rome’s dishes were not permitted to evolve from their primitive state, we would have no pepper with our cacio, no tomato in our bucatini all’amatriciana, and certainly no cocoa on our coda! I would also argue that the dishes of Ethiopia and Eritrea, or at least their incarnations in Rome, can now be added to the Roman cannon due to their decades of presence in Rome. At 00100 in Testaccio, they seem to agree.

Their trabissino allo zighini’ is a triangle of spongy pizza bianca slit open and filled with a rich East African meat stew. The name trabissino is a play on words, mixing the word Abyssina (abissino in Italian) and trapizzino. The latter is the word created to describe 00100’s Roman street food invention. That word, in turn combines the words pizza and tramezzino, a word, which, in turn, was invented by Gabriele D’Annunzio). Apparently a trip to 00100 is an exercise in both gastronomy and semiotics. Street food never tasted so smart.