Skip to content
Home/The Final Word on Armageddon
Previous Next

The Final Word on Armageddon 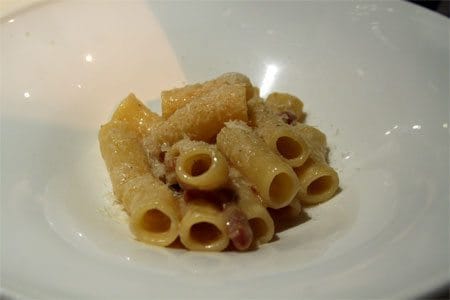 As promised, I have written the English translation of the post I wrote for Scattidigusto about a dinner hosted at L’Arcangelo on Saturday night. Here’s some backstory: I had a bad meal at L’Arcangelo; I wrote a post about it, referring to the meal as apocalyptic; the post sparked enormous debate in the Roman food world; Scattidigusto organized a conciliation dinner called “Armageddon” at L’Arcangelo, which I attended with fifteen fans and friends of the restaurant.

But before I go ahead with the translation, I just want to be clear on two points. First, I paid for this meal out of my own pocket. Second, L’Arcangelo knew that I, and the other fifteen guests, were coming. More on that later…This is what I wrote for Scattidigusto:

In May I had lunch at L’Arcangelo. It was terrible (raw rabbit, improperly reheated oxtail, and an awful cassatina) and expensive (starter, second, dessert and beverages came to €76). I wasn’t exactly in a hurry to return. But when Scattidigusto and L’Arcangelo organized a massive retaliation feast they called “Armageddon” I made a reservation for the sixteen person dinner party.

The menu for this “apocalyptic” dinner combined some things I had eaten on my trip in May and many other things I had not. In comparing the two meals, I can say that there was a noted improvement in the technical execution of the food, but some of the aspects of L’Arcangelo’s cuisine didn’t quite win me over.

The best dishes
If a Holy Trinity exists, it would be formed by supplì, pasta cacio e unto (la gricia) and gnocchi di patate all’amatriciana. These three dishes made me see why so many diners describe their meals at L’Arcangelo as “divine”. The supplì were exceptional and I especially liked the use of chicken offal in the filling alongside the ground meat. The pasta cacio e unto was super al dente, almost crunchy, exactly as I like them. Not everyone was a fan. Arcangelo joked that Vincenzo Pagano, editor of Scattidigusto, “would have eaten the raw pasta from the box” while others would have preferred a longer cooking time. The gnocchi, in particular, were spectacular, little starchy pillows in perfect harmony with their tomato and guanciale condiment.

All the participants were given a rubric for rating the dishes. I gave the gnocchi a perfect 10, others a 14.5 out of 10. Unfortunately, the gnocchi are not on the normal menu and were prepared in the style of Sora Lella especially for the dinner.

The other dishes
Trip between Lake Regillo and Rocca Priora (the name for a combination of appetizers that includes a frittata made with wild greens; ricotta and must; cod and pancotto; and fried rabbit on fette biscottate, mass produced breakfast toast). The individual components were fine, but what was missing, in my opinion, was a reason to put cod and ricotta next to one another. I needed a thematic link, as there would be in the second course. As I have already cited in my blog, I find the use of fette biscottate with the fried rabbit extraneous. A mass produced breakfast toast doesn’t bring much to the plate and I would have much preferred to see a toasted slice of pane di Lariano.

Four passages of an aromatic torment plus one (the name for the second course that includes five small portions: pound cake with whipped cream, anchovy, and coffee; quail, cicerchie and lavender; a small porchetta sandwich with caramel; sweetbreads, herring, and buondì Motta (more breakfast food); Roman style oxtail with cocao beans). This series of dishes was linked by aromatic and spiced elements. Just as in May, the sweet combined with anchovy was terrific. The quail was better this time around. It was properly seasoned and the lavender was evident. The oxtail was fine and served at the proper temperature. But, ironically, the flavors were richer and more complex in May, when the oxtail was served cold in the middle. The sweetbreads and herring were, once again, wonderful, but I remain unwaveringly against the use of buondì in this dish.

The liquid white chocolate dessert was served with capers, candied ginger, and Giulio Campello’s extra virgin olive oil. This dessert was…interesting. The aromas from the oil were pleasant and I enjoyed the texture contrast between the candied ginger and chocolate soup. But, I found the use of capers superflous and if white chocolate hadn’t been written in the title, I never would have guessed it was in there.

Conclusion
At the end of the meal, all sixteen attendees evaluated their dishes on a scale of one to ten. Each person calculated their average score. I ended up giving the dinner a 7.6 out of 10. The meal lost points for the fette biscottate, buondì Motta, the porchetta sandwich (which I don’t really find appropriate for a second course) and for the dessert. The group average was 8.5 out of 10, not all that far off from mine.

I have changed my mind about L’Arcangelo to a certain extent and tasting many things, obviously, allowed me to make a more accurate assessment of the restaurant. Arcangelo’s talent is most evident in his brilliant interpretations of the cucina romana, dishes I did not try on my first visit. The other dishes don’t quite reach the level of the pasta cacio e unto, suppli’ or the gnocchi.

Clearly the experience was different this time around. In May, I was an anonymous, unannounced client who came in for lunch on a random Monday afternoon. Eating things the restaurant is famous for (suppli, cacio e unto, etc) also changed the experience for the better (even though in a restaurant of L’Arcangelo’s reputation and price level, everything should be prepared well all the time). But, in the end, I am happy to have returned with privileged guests (friends and fans of the chef–we call them raccomandati in Italy) in order to see what Arcangelo is capable of. The gnocchi alone were proof that the place warranted a second chance.

So, there you have it, my second assessment of L’Arcangelo. But I do not think this piece nor the post in May should be confused for a restaurant review. The former was a playful, hyperbolic critique of an absurd experience. Equally anomalous was Saturday night’s dinner, which took place under completely artificial circumstances. The menu was vast and inexpensive, the meal was planned long in advance, and the chef knew I would be recounting my experiences. Saturday was fun, I learned something, but proper restaurant critiques require numerous and anonymous (or at least unannounced) visits. I’m not sure how how ready the Roman food world is for what else I have to say, but one thing is for sure, I cannot be censored. Look for my future posts on Scattidigusto and several other Rome based Italian food blogs shortly.