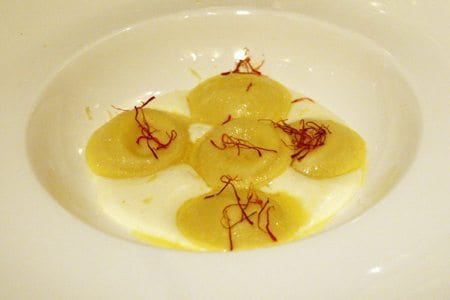 It’s January, so it’s only natural to start planning meals for the next twelve months. If you intend to visit Rome in 2011, I can start you out with some advice on how to order, and suggest some of my favorite places to eat and drink (don’t forget the pizza!). There have also been quite a few changes to the Rome dining scene. Here’s an overview:

2010 OPENINGS
In spite of the financial crisis, plenty of new places opened in Rome in 2010. Here are some spots I recommend:

Enoteca Provincia Romana opened next to the Column of Trajan. It serves wine and food from Rome and its surrounding areas. You can read a bit more about it at the end of this article that I wrote forThe New York Times.

This summer, S7HEVA opened on Via Santa Maria del Pianto 1B. This bar/cafe serves drinks and food and, when the weather permits, has well positioned tables on the piazza in the heart of the Ghetto.

Beppe E I Suoi Formaggi opened in October on the same street. It fills the former Bottega del Vino shop (see closures). You can read all about this fabulous wine and cheese store here and here.

Mama’ Kosher Food at Via Portico d’Ottavia, 14 also opened in October. This kosher fast food joint serves quite a decent burger, and on toasted bun unlike most Roman joints!

In September, Bar del Fico reopened in Piazza del Fico after a two-year renovation. Erica Firpo reports on the changes for The Nile Guide here. I’m not the biggest fan of this place, but it does the trick when you need a cute place for aperitivo in centro.

Another newcomer on the bar scene was Conter, a very welcome addition to Piazza San Giovanni in Laterano. It serves wine, cocktails, snacks, and meals and has already achieved considerable renown for its pagnotelle (stuffed savory buns). Though it opened in September, there is still no functioning website and their Facebook page has no phone number listed. So I guess “Like” them, then write on their wall if you want more info.

Ristorante Settembrini expanded into the bar sector this fall, inaugurating Caffe’ Settembrini, which serves excellent snack, both savory and sweet. Unfortunately there is no sign of the caffe’s existence on Settembrini’s website, but you will indeed find the place at Via Settembrini 21.

The OS Club opened on Via Terme di Traiano near the Colosseum in November. Though this place wins the prize for the worst and most confusing marketing of 2010, it still has plenty of potential due to the spaces it occupies and the talented young chef in the kitchen. You can read about lunch at the OS Club’s Hostaria here and dinner at Iolanda here.

Roy Caceres, formerly of Pipero, opened his first restaurant in Parioli in November. The fine dining establishment is located at Via Giovanni Antonelli, 30/32. Additional details here.

Tricolore, a bakery/gourmet sandwich shop/teaching space opened on Via Urbana in Monti in late November. You can read all about it here.

MACRO 138, a Gambreo Rosso affiliated restaurant, opened in the Macro Museum in December. I haven’t been their yet, but plan to check it out this month. It is Tuesday through Sunday, dinner only. The entrance is at Via Nizza 138. I wasn’t able to find a phone number for this place or any information on the Macro website.

CLOSURES
Sadly, several places in Rome have closed: Bottega del Vino in the Ghetto, Fata Morgana’s Via Ostiense location, the nearly century-old Frontoni on Viale di Trastevere, and La Piazzetta in Monti, to name a few. Also in Monti, Il Giardino del The on Via del Boschetto has closed its restaurant, but continues to sell tea pots and loose tea.