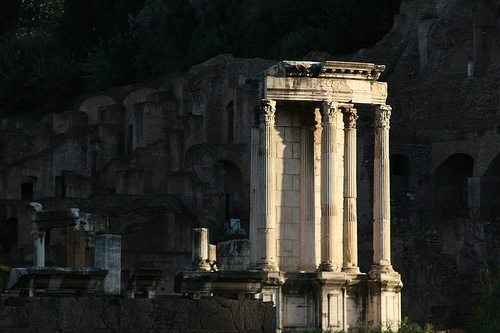 The Vatican may attract the most visitors to Rome, but many millions flock to the eternal city for its Ancient history. I made my first trip in 1996 with my high school’s Junior Classical League. This was the age before social media. The internet was scarce. I spent the next five years reading about Rome in books and watching documentaries on the History Channel. I always hoped that I could participate in preserving the city in some way, no easy task considering the bureaucratic obstacles involved and the lack of opportunities for private citizens to invest in archeology. Now everyone has the opportunity to protect and document Rome’s cultural patrimony. It only takes a moment and can be done completely online. Here are two ways you can help:

Sign the petition to save “The Gladiator Tomb” from being buried. The second century mausoleum of Marcus Nonius Macrinus, the general who inspired the film The Gladiator”, was discovered on the Via Flaminia and is in danger of being buried, as funds to excavate are scarce. Send a message to the city and state authorities in charge of the site and sign the ipetition here. As of today, there are 2,507 signatures. Get involved! For more on the tomb, visit the American Institute of Roman Culture site here.

The American Institute for Roman Culture offers programs and projects in Rome for students and scholars. As part of their unique interdisciplinary offerings, the AIRC is seeking to raise funds for a one-hour documentary called “Digging Rome”. The non-profit educational video will be broken up into 5-10 minute podcast segments that explain and explore Rome’s rich cultural history. You can help the AIRC reach their goal of $10,000 by donating on Kickstarter here.