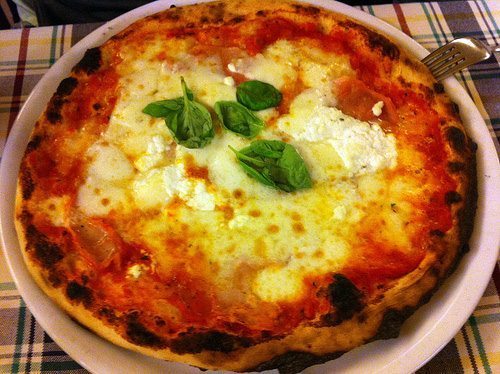 UPDATED JAN 2013: Rome may not be Italy’s official pizza capital. That title goes to Naples. But you can find a variety of styles in Rome, from paper-thin Roman style, square pizza-by-the-slice, and thick-rimmed Neapolitan style. Not all of it is great. In fact, I would argue that most of the local Roman style pies out there are edible, not excellent, and famous places like Baffetto are underwhelming. But there is some amazing stuff out there (especially boutique Neapolitan style). Here’s a round-up:

For thin crust Roman style, you can’t beat Da Remo on Piazza Santa Maria Liberatrice, 44 in Testaccio. It is only open at dinner and is likely the best of its genre. I also like Li Rioni on Via Dei Ss. Quattro Coronati, 24 near the Colosseum. It’s my local and wins major convenience points, but isn’t worth a trip the way Da Remo is. For a very decent pizza near Piazza Navona, Dal Paino on Via di Parione 34 does the trick, and it’s open at lunch. Like Li Rioni, it’s not the greatest pizza on earth, but it will fill a void and is vastly superior to its neighbors.

For downright excellent pizza by the slice, check out Gabriele Bonci’s Pizzarium (via della Meloria 43). I also recommend Antico Forno Roscioli (Via dei Chiavari 34) for some pizzas, the sausage and potato-based ones are super heavy. Nearby, Pizzeria Florida (Via Florida 25), is quite good, as are 00100, and Forno Campo de’ Fiori (Campo De’ Fiori, 22).

In other generes, La Fucina (Via G. Lunati 25-31) serves a sort of focaccia with toppings and La Pratolina serves oblong pies called pinse. Both are highly recommended.

Please avoid central Rome’s most overrated pizzerie, both in Trastevere: Dar Poeta and Bir e Fud, serving inedible pizzas with a smile and wonky pizzas with a frown, respectively.