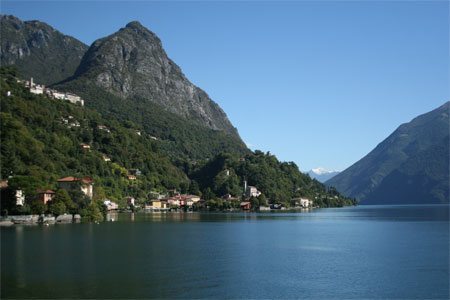 After spotting the Swiss Alps on the distant horizon from the belvedere in Brunate, we headed northwest towards Switzerland. Due to my inability to read a map and my general ignorance of northern Italian geography, I was surprised when we crossed the border about 10 minutes after leaving Como.

We followed the road to Lake Lugano and trimmed the lake’s west coast. At some point we unknowingly crossed back into Italy (boy these are some permeable borders!) and stopped at the village of Porlezza, located at Lake Lugano’s northernmost point. We grabbed two piadine on the fly. For the record, this is not the best place to eat piadine, or, from what I saw served around town, anything else.

With our blood sugar back on track, we continued north and somehow ended up back on Lake Como (again my confused navigation skills coming into play). By this point, I had given up on the map and we just drove. We followed the lake road north, taking in the gorgeous vistas and dramatic terrain. 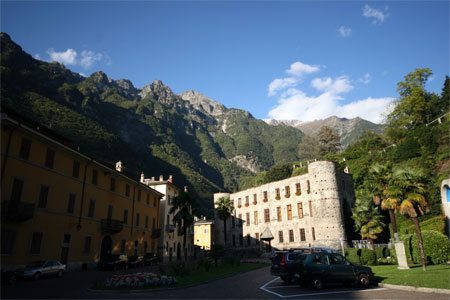 We got to the top of the lake and drove into the Valtellina zone of Lombardy, a place noted for its excellent food and wine. Of course we decided to stay. We drove to Chiavenna and checked into the first hotel we found. I put the word out on Twitter that we had arrived in the bresaola capital of the world and Sara Porro (@SaraPorro on Twitter) suggested a couple of places. We ended up at Crostac, a restaurant with a homey rustic feel located in Mese, just a few kilometers south of the hotel. 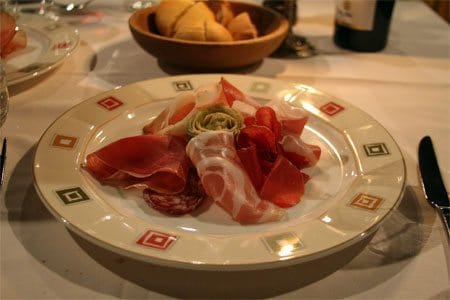 We both started out with salumi misti, including the local bresaola, proscuitto, pancetta, and capocollo. 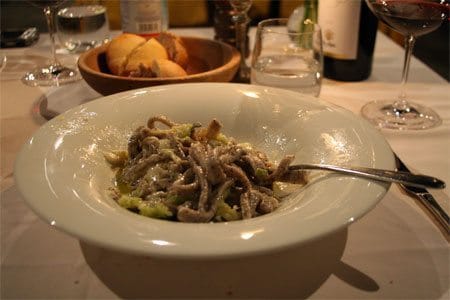 For his primo Dad ordered ravioli with squab stuffing, which was excellent, and relatively light compared to my choice. I had the heart-stopping combo of gnocchetti (dense chunks of pasta tossed with butter and sage) and pizzoccheri alla veltellina (buckwheat pasta with cabbage, cheese, butter, and potatoes. They were served in half-portions, each of which would have been a meal in itself. These winter dishes are so heavy and caloric, they nearly sent me into a state of hibernation. 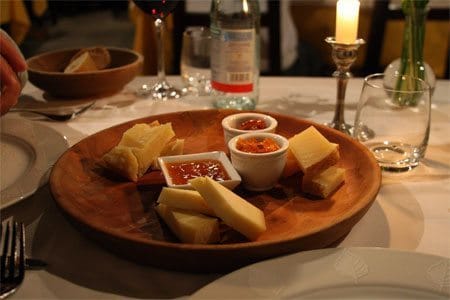 Fortunately, I was able to work through it and we moved on to the next course. Dad’s secondo was a veal dish, again on the light side, while I got the ridiculously heavy and very delicious rabbit over two-flour polenta. All this was followed by a cheese plate, a vertical tasting of a local cheese called bitto, which had previously appeared in the pizzoccheri. We drank Nino Negri‘s 5 Stelle Sfursat di Valtellina DOCG with our massive feast and followed it up with Amaro Braulio, the local digestive liquor, which did its best to combat the densest meal of the trip so far.

*A special thanks to PJ Spagnolatti (@drakpz on Twitter) for his Valtellina dining advice that I will soon be back to test out!*