Skip to content
Home/RivaReno, Italian for Bland?
Previous Next 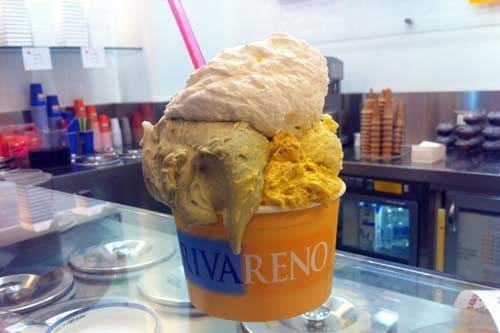 RivaReno, a gourmet gelato chain, opened in Rome’s San Giovanni district last year. Along with Grom, which opened in Rome this June, it is part of a pointless trend in Italian food culture, a soulless national franchise that uses great ingredients but fails to deliver on their taste. I paid a visit to RivaReno last month. Pouring over the menu evoked salivation and high expectations. I found the product to be quite boring, lacking the intensity that truly great gelato has. In fact, a month later, I can’t even remember the flavors I tried, though the photo above suggests pistacchio and perhaps crema. It all seemed engineered to be approved for mass consumption, to be as inoffensive as possible, void of the character one can find at Rome’s smaller artisanal operations such as Gori and Fatamorgana. Have I been spoiled by the likes of Claudio Torce’ and Ermanno di Pomponio or is RivaReno just a corporation whose marketing has blinded its fans?