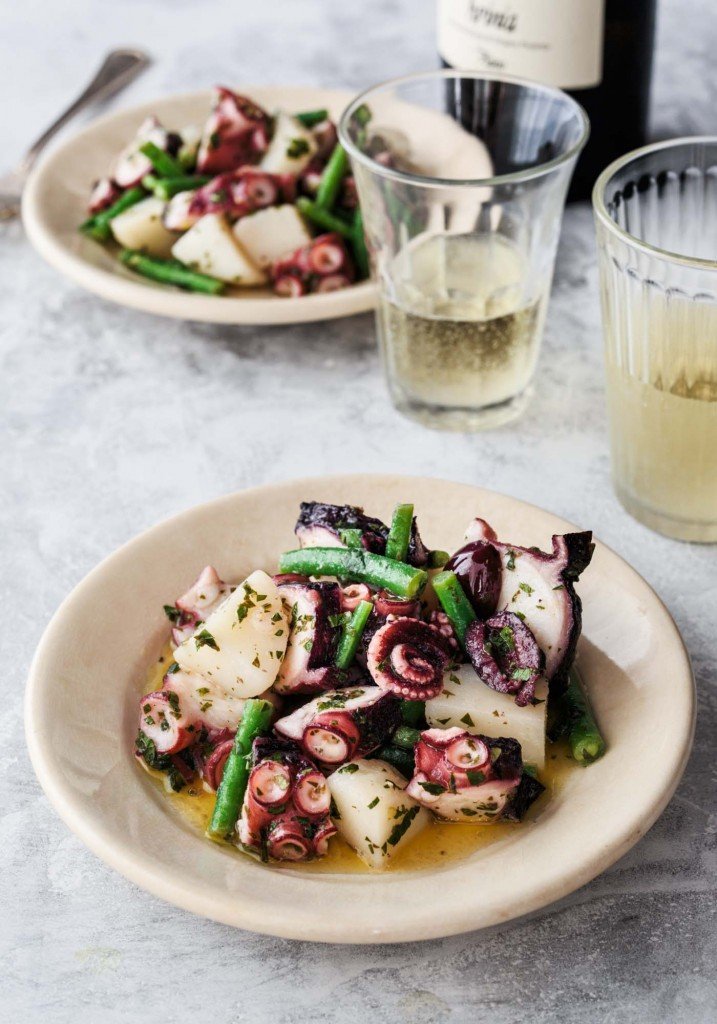 In southern Italy octopi are plucked from the sea and transformed into tender salads. The precise condiments change from kitchen to kitchen but tend to include lemon juice, parsley, olive oil, and herbs. My favourite variation is inspired by the coastlines of Basilicata and Campania, where potatoes are added to dishes of all kinds–even sweets–to enrich them. This octopus and potato salad is further enhanced by the addition of blanched green beans, which add a bit of crunch and textural contrast.

For a tender and flavourful octopus, braise it in its own juices rather than boiling it. Simply combine the cleaned octopus in a pot with aromatics over medium heat. Cover and the octopus will begin to release and cook in its own juices.

To clean an octopus, separate the head from the body with a sharp knife just between the eyes and legs. Remove and discard the eyes and scrape out the entrails and ink sack from the head and discard, as well. Serves 4 to 6.

Zest of 1 lemon, removed with a vegetable peeler

Zest of 1 orange, removed with a vegetable peeler

¾ cup plus 1 tablespoon extra-virgin olive oil, plus more as needed

3 tablespoons fresh lemon juice (from 1 lemon), plus more as needed

Meanwhile, place the potatoes in a separate large pot and add enough cold water to cover. Salt the water (see page 000). Bring to a boil over medium-high heat and cook the potatoes until fork-tender, about 30 minutes. Drain and allow to cool slightly. Peel the potatoes and cut into 1-inch cubes.

While the octopus and potatoes are cooling, in a large bowl, whisk together the olive oil, lemon juice, mint, parsley, and pepper.

Add the potatoes to the bowl and toss with the vinaigrette while still warm, then add the octopus, and olives.

Fill a medium bowl with ice and water. Fill the cleaned pot used to boil the potatoes with water and bring to a boil over high heat. Blanch the green beans in the boiling water for 1 minute, working in batches as needed. Drain the green beans and immediately plunge them into the ice water bath. Drain again.

Add the green beans to the bowl with the octopus. Toss well, season with salt and pepper, and add more olive oil as needed. (Warm potatoes can absorb a lot of oil, so you may need a bit more than suggested.) Serve immediately.

Recipe from Food of the Italian South. Photo by Ed Anderson.

Add the book to your collection!