Girlfriend in a Coma – Official Trailer from Annalisa Piras on Vimeo.

The title of this blog post is only accurate if your head is buried in the sand. Italy is a lovely place to visit, but you’d have to be oblivious, wealthy, corrupt, an optimist or a masochist to live here without totally losing your mind. From the outside, it’s easy to romanticize its foibles as quaint and to be curious about (but unaffected) by its rampant lawlessness. The reality is, Italy is in a period of accelerated decay. The signs are all around us and even the things that used to be relatively accessible, like eating well and getting by, are rapidly vanishing.

Journalists and cultural commentators like Roberto Saviano, Annalisa Piras and Bill Emmott attempt to document the current social, political and economic climate. Their works distill the nation’s woes into concentrated doses and what they portray would leave any reader or viewer distraught.

Their messages are so powerful that Saviano has faced death threats and lived in hiding, while the premier of Piras and Emmott’s film “Girlfriend in a Coma” has been banned. The film, which is highly critical of former (and perhaps future) prime minister Silvio Berlusconi, was meant to premier at the MAXXI in Rome on February 13, but it is now scheduled for release only after February 24, following the national elections.

So what is going on in Italy? What do its residents face live through every day? Here are a few highlights:

Organized crime banks an estimated €160 billion a year, around 10% of Italy’s GDP. Some believe this number is much higher and all acknowledge we can never know the true number.

Stable work contracts and job security are a thing of the past. Labor reforms that could have led to economic growth have instead fueled brain drain as unemployed university graduates leave Italy in droves, seeking work in Northern Europe.

Small businesses are folding left and right, paving the way for growth of corporate supermarkets and fast food chains.

Sounds like an awesome place to live, right? Well don’t worry, you can seek solace in the consistent expansion of one industry: fast food. Pieces like this one on Al Jezeera are reporting old news. Remember the McItaly ads from 2010? Ronald McDonald has been around for ages and is here to stay. The Slow Food movement can hardly claim the same kind of growth. 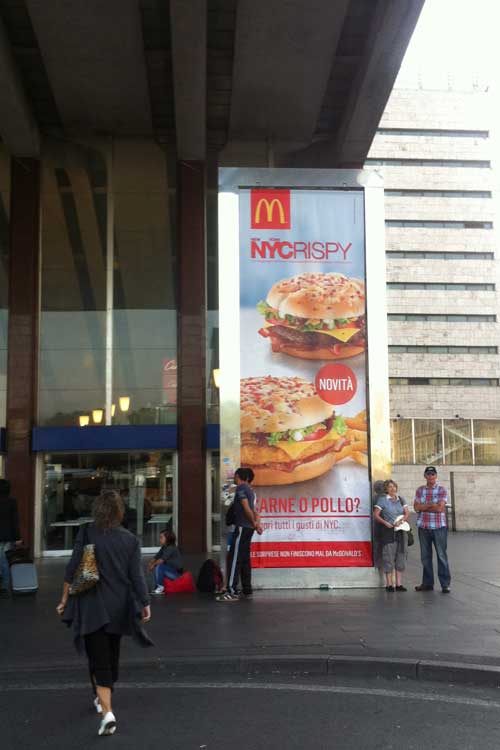 So while fast food consumption (and childhood obesity) rises, cultural heritage is neglected and plundered, and free press is stifled, a sticky orange 76-year-old waits in the wings to put the final nail in the coffin. In three weeks, Italians will return the polls. Berlusconi is poised to return to the throne of his delapidated kingdom, enticing voters with his promises of a cash in exchange for their support. If the first two decades of his tenure are anything to go by, a Berlusconi win spells certain defeat for the future of Italy and those who call it home.

So as not to end this post on a totally depressing note, I will leave the final word to “Girlfriend in a Coma”: “This is NOT THE END. You can change it.”