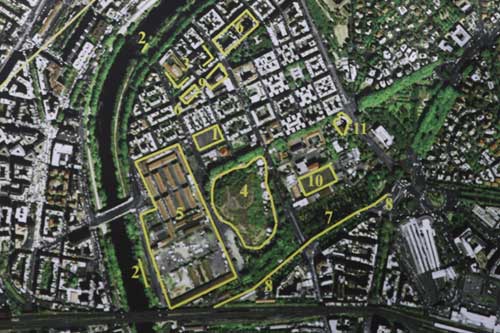 Testaccio seen from the air.

The end of an era is approaching. The nearly century old Mercato di Testaccio will shutter its stalls soon enough (the precise date depends on who you ask; La Repubblica recently reported an opening date later this month) and the vendors who can afford to move will relocate to the Nuovo Mercato Testaccio at the end of Via Galvani, opposite the ex-Mattatoio. Of course, the new space will offer amenities the current one does not. But the rents are going up as well. And since I cannot stomach the commercial atrocity and architectural abortion that is the Nuovo Mercato, I asked Jillian to look into things for her last assignment. Her excellent report follows.

“The bustling Testaccio market that I visited Saturday morning—a delightful jumble of fish vendors and fruit stands, stalls boasting dozens of cheeses and 2-liter bottles of wine for 3 euro at every corner—is slated to close in the coming weeks. In its place, or rather, a few blocks over, the new Testaccio market will open its whitewashed, neo-something doors to the public.

The 97-year-old market’s new destination? A 5,000 square-meter building just off of Via Galvani (a short walk from Ponte Testaccio). Per Katie’s suggestion, I spent some last week peering at the new venue’s layout through the barred façade, taking in the orderly emptiness of it all and, I have to say, the space left me feeling utterly unenthused.

Apart from the diverse selection of offerings and endearingly pushy vendors, one thing I loved about the old Testaccio market was its low prices. Now, word has it that stall space at the Nuovo Mercato costs nearly double what it did at the old market, begging the question, how will vendors make up the price difference in the new venue? Seasoned vendors know that simply passing the elevated costs along to customers means that they can kiss their regulars goodbye. Why would the average market-goer (an elderly woman living off her husband’s pension) pay more when Testaccio has cheap supermarkets? Instead, it seems that the market’s creators are hoping that the numbers will balance out other ways—namely, increased number of shoppers, and increased number of purchases. Think Costco, Italian style. 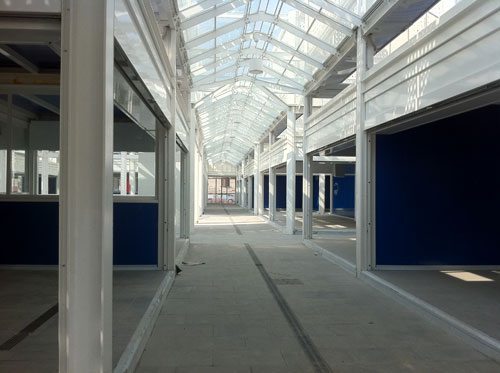 The new market is located next to a very large, very heavily advertised underground parking garage—perhaps customers will flock to Testaccio in their cars, buy their groceries in bulk, then load everything into the trunk and drive home—because that’s totally Italians do their shopping. Really though, whereas the old market is conveniently located steps away from the number 3 tram line, the new location anticipates the majority of customers arriving in macchina. Another likely scenario: the area is being primed for tourist takeover. Let’s face it: with the gigantic Roadhouse Grill (Name: English, menu: English. C’mon people!) and a perfectly uninteresting sushi house right next door, Via Galvani will become an ideal destination for tourists wanting to experience Italian market life and then grab a steak afterward.

Perhaps I’m not being entirely fair. The Nuovo Mercato has the potential for a cleaner, more hygienic atmosphere (running water, score!) than its older counterpart, and that’s worth noting. But the bland layout of the new location makes me yearn for the gritty authenticity for the old market—and it hasn’t even closed yet! As of last week, it looked as though not a soul had started moving in to the new space, but my source (a server at a nearby café) told me that the market is set to open soon—May 3rd! Looks like we’ll all have to wait with bated breath until the Nuovo Mercato Testaccio actually opens for business, and our critical eyes can officially pass judgment.”

Thanks Jillian for your superb contributions! Readers can follow her from now on at The Daily Californian.