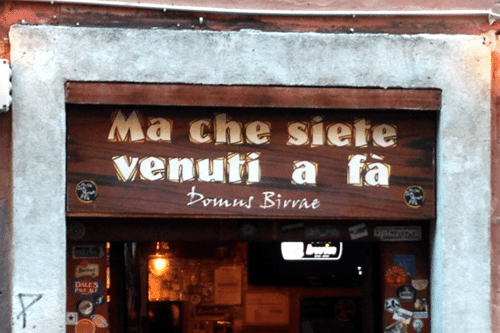 Sticking to this week’s craft beer in Rome theme, I asked Sam Carolan, University of Minnesota student, Parla Food intern and budding craft beer drinker to check out Ma Che Siete Venuti a Fà in Rome’s Trastevere district. This pub is one of the greatest places in Italy to drink beer and, though it can be an intimidating destination for the uninitiated, like a vintage lambic, it improves with time. Here’s Sam’s report:

“I just turned 21, so I haven’t exactly had a lot of exposure to craft beer back in Minnesota, where microbreweries pop up left and right (and close just as frequently). I admit I find the culture a bit discouraging and hard to tap into (no pun intended), but i am eager to learn, do I was excited when Katie asked me to visit Ma Che Siete Venuti a Fà.

Located on Via Benedetta in Trastevere, the narrow pub hides in your peripherals; if there weren’t people drinking beer outside the door, I never would have found its non-descript entrance on my first try.

When I walked in, there was one bartender behind the taps. It’s hard to imagine more than that squeezed into the slim space between the bar and the back wall. I surveyed the choices and, due to language barrier and lack of familiarity with what was on offer, I panicked and ordered the first beer I saw: Montegioco’s Mac Runa. This peated Scotch ale is 7.2% alcohol by volume and displayed an orangey tint. I think I would have enjoyed it more if it was 70 degrees and I was sitting outside in May instead of inside on a February night. 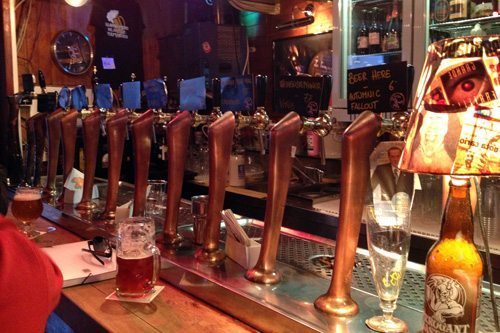 Next, I ordered the Birrificio del Ducato’s Verdi Imperial Stout, another style altogether and one which weighs in at 8.2% alcohol by volume. This one tested my tolerance of Imperial stout. Though this beer wasn’t my cup of tea, the wood paneling in the small space made me feel like I was drinking inside of a barrel, which I found to be rather cosy and inviting. I’ll definitely be back to try more.

Prices on all draft beer are €6; there is a €4 option for a shorter glass. They don’t serve any food, save for a few chips. Ma Che Siete Venuti A Fà gets busy in the early evenings and stays crowded until late.”

For other craft beer venues in Rome check out my dorky Google Map!