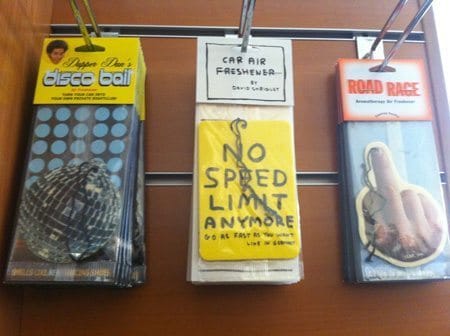 The souvenirs at the Scuderie are as well conceived as the translations.

It’s been a while since I’ve had a good old fashioned rant here on Parla Food, but I’ve had a really overwhelming 2 days and I think I’ve earned it. To be fair, lots of things were good about Monday and Tuesday: I spent them with my mom, made rabbit ragu and lamb meatballs from gorgeous meat we bought from Carni Magini, ate 9 gelato flavors at Il Gelato di Claudio Torce’, bought buffalo ricotta and mozzarella at DOL. We even worked in a pilates session with Claudia at Studio Pilates Roma.

But on the flip-side I had an adult temper tantrum after missing a bus that just plain refused to stop for me though I had clearly signaled for it in advance. I nearly hyperventilated on the overcrowded bus that came next, and I cried for no good reason. I’m stressed out, so before I board the express train to crazy town, I would like to at least attempt to relieve my tension in the best way I know how: lashing out against things I am powerless to change. It is not productive, but it is a skill I have honed for years and it makes me feel good. Today I would like to direct my rage towards the English translations for the Lorenzo Lotto show, or as I like to call it, Google Translate on crack. 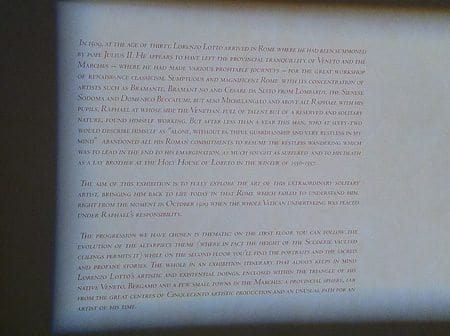 The Lorenzo Lotto exhibition opened at the Scuderie del Quirinale earlier this month and it is STUNNING. The works of art are fabulous and, not being very familiar with Lotto’s work, it was a real pleasure to view them in a well organized space with good lighting. What was not so pleasant, however, was reading the English translations. At past shows at the Scuderie the translations have been very good. But what the Lotto show gained in great lighting it lost in English literacy. An example:

Sumptuous Rome with its concentration of artists such as Bramante, Bramant no, and Cesare Da Sesto from Lombardy, the Sienese Sodoma and Domenico Beccafumi, but also Michelangelo and above all Raphael with his pupils, Raphael at whose side the Venetian, full of talent but of a reserved and solitary nature, found himself working.

What? Who’s Bramant no? Oooooh That’s Bramantino! Obviously. Well, let’s just let paying visitors figure out that one for themselves. And while we’re at it let’s wish them luck wading through the dense and confusing sentence. This isn’t even the worst of it, but I can’t even talk about the paragraph that had two colons in the place of commas. The misuse of “emargination” when the translator meant marginalization is too much: too much! Of course I asked at the desk who I should contact to communicate my constructive criticism. They kindly offered the following email address, [email protected]), informed me that I wasn’t the first person to notice the terrible English text, and said that the priority was on the lighting in this show. To be sure, the lighting was glorious, but c’mon. This is 2011 and there are PLENTY of mother tongue English speakers in Rome who could use the work. And for the love of god, exhibitions should have accurate signage in English. Why go through all the trouble and then do a bad job?

Whatever. I sent my email (if you agree with me, send yours). I know it won’t make a difference, but complaining always makes me happy. I’m feeling better already.