Skip to content
Home/Lampascioni, An Apulian Specialty
Previous Next 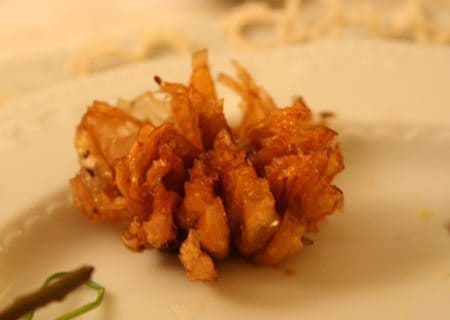 Lampascioni (pampasciuni ‘n salentinu) are walnut-sized hyacinth bulbs (not onions as they are often erroneously described) with a distinct bitter taste. They are native to Puglia and are prepared in a myriad of ways. I ate them for the first time in Lecce and they were served in agrodolce (sweet and sour), a preparation that cuts the bitter flavor while softening the bulbs; they are also served baked, roasted, or fried. Last night at Il Frantoio near Ostuni I ate them fried (una novita’), then soaked in orange honey.

Lampascioni are a great example of a regional product that derives from a poor tradition. They grow almost exclusively in Puglia and were consumed by the poor who would forage for them in fields. The same holds true for many of the herbs and greens found in the cucina pugliese. Now, these local products are a much sought mark of authenticity in one of Italy’s premier food regions.