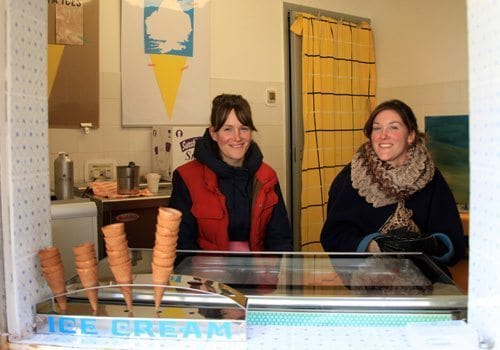 Concord grape and prosecco sorbet. It’s a flavor combo that would be right at home in autumnal Italy. But Londoners can enjoy this tangy-tart-effervescent treat, too. Kitty Travers is serving this and other seasonal flavors at her new shop, La Grotta Ices Ice Cream Hole in the Wall, which opened in Bermondsey’s Spa Terminus last weekend.

For years, Kitty sold her ice creams and sorbets from an Piaggio Ape mini truck. She circulated at Maltby Street, then Spa Terminus, earning a name for her Italy-inspired creations, which she makes from meticulously sourced ingredients. It has been inspiring to watch her small, quality-driven business grow.

Kitty honed her food sensibility while working in Rome and Naples, including a stint at the Rome Sustainable Food Project. We didn’t meet while she was here in Italy, but rather became pen pals, swapping food advice via email. We have stayed in touch over the years, meeting up frequently in London for meals, drinks, and chats.

Her passion for gelato is contagious (as though anyone need be infected!) and it has taken her on cross-continent road trips for antique equipment and to obscure markets to find new ingredients. Pop and and see what’s she’s up to. You can stay up to date with La Grotta Ices appearances and flavors here. La Grotta Ices Ice Cream Hole In The Wall is open Saturdays 9am-2pm. It is located in Bermodsey Spa Unit 12 Between Spa Rd & Dockley Rd (next to Fern Verrow produce stand and opposite The Kernel Brewery.