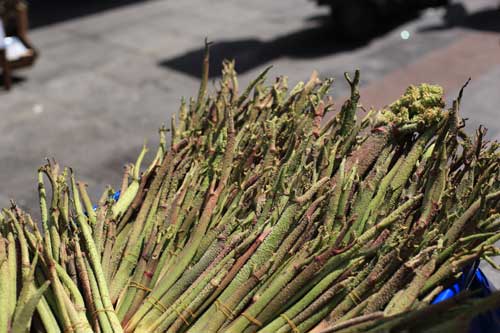 As we walked down Via dei Pettinari in Rome on Tuesday, clients asked me, “is there anything you don’t eat.” I paused for a moment and thought long and hard. “I don’t love brains,” was my reply. But I never turn them down, either. There had to be something on earth I would never eat again.

Less than 24 hours later I was sitting at an outdoor table at Çiya on Istanbul’s Anatolian side eating seasonal kebabs with my friend Tuba. Little did I know I was about to taste the only food I truly dislike. While were were chatting, Tuba spotted a push cart full of knobby green stalks. “Take your camera! Come with me!” She said as she leapt up from the table and stopped the vendor cold in his tracks.

“What is it?” I inquired. They looked like demented asparagus. I have seen a lot of unusual things pushed around in carts in Istanbul, but this was a first. “Işkın, wild rhubarb,” replied Tuba as she placed her order and received several bundles of the stuff. At this point passersby began to swarm around the cart. A group of school children converged on it as though it were giving away candy. I was optimistic.

We returned to our table and Tuba peeled me a stalk, stripping off the thin outer skin and handing it over to me. I guess I expected it to taste like pie or something. It didn’t. On her blog, Tuba describes ışkın, which is eaten mainly in eastern Turkey, as tasting like “grass, green plum and spring flowers.” While I like all these things individually, when they are combined in a mouth puckering, slightly tannic fibrous stalk, I’m not such a fan. So I learned something this week—when I am with Tuba I always do.