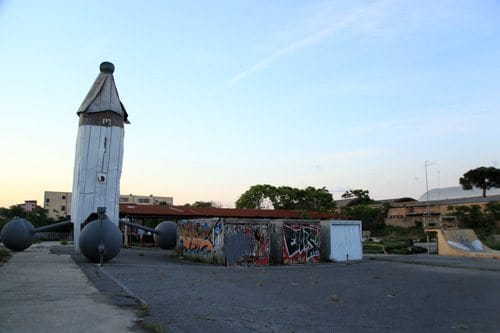 I have always been attracted to the Via Prenestina in Rome. To my knowledge, no one has ever written such a thing in the history of the civilization. It is not the most appealing consular road, or so I have been told. But, what can I say? I have unconventional tastes. When I lived in Rome between my junior and senior years in college, I spent alternate days researching my thesis (on the use of the Amazonomachy in Roman funeral art. RIVETING!!!) and wandering beyond the city walls. At the time, the Via Prenestina felt exotic and peripheral. I would walk from Porta Maggiore, pause at the carb shrine that is the Tomb of Eurysaces, then wander beneath the train tracks, past the tram depot, worry about my safety, then keep walking.

At that time (it was 2001), no one spoke of–much less went to–Pigneto. And, though I had already set my mind on settling in Rome, I never envisioned my first four years here would be spent on the Via Prenestina, residing in a hideous 1970s era apartment building beside the languishing ruins of the Villa Gordiani. I have long since moved away, but I still have a major soft spot for the Prenestina and I often return for walks and sometimes runs (when I want to maximize my car exhaust consumption).

One day in May, as a long distance run reached the GRA, I came upon Metropoliz. Hogre, a famous local stencil artist, was painting the exterior wall. I made a mental note to return and discovered a fascinating and unusual facility where 200 squatters (I do not mean this in a pejorative sense) live in the ruins of the old Fioriucci salami factory in relative harmony amongst sculpture, paintings and installations. In this weekend’s NYT Travel section, I write about Metropoliz and two other cultural destinations just off the Prenestina. Read about these transformed buildings near my beloved road here.