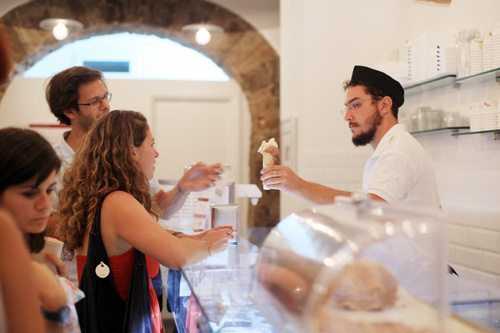 When the Piazza Monte d’Oro branch of Il Gelato closed earlier this year, the historical center of Rome was robbed of one of its few exceptional gelato shops. The loss was felt by visitors and locals alike who starred forlornly into the abandoned space once filled with so many dozens of delicious flavors. The only consolation for this grief is that now another of Rome’s top artisanal gelato producers has opened a shop near the Spanish Steps.

On Saturday May 25, Gelateria Fatamorgana opened at Via Laurina 10, just off Via del Corso. This is the fifth location offering Maria Agnese Spagnuolo’s spectacularly clean and intensely creative flavors. Look for seasonal gusti like amarena e birra (sour cherry and beer), panacea (mint, ginseng and almond milk) and basilico, noci e miele (basil, walnut and honey) as well as all the classics like Kentucky (chocolate and tobacco).

Special thanks to my pal Marc for giving me the heads up about this opening.