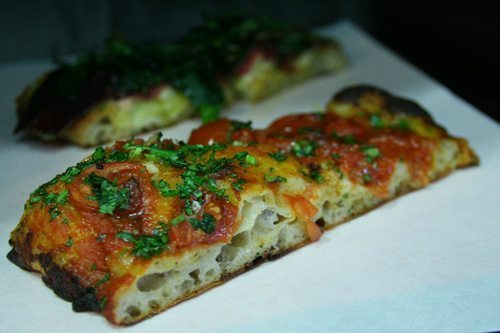 Romans don’t care about agriculture or farmers. This is a direct quote from a noted Roman chef. In fact, I hear this sentiment over and over again from chefs, bakers, gelato makers and gourmet shop owners. Are they exaggerating? Not really. Of course, there is a small niche in Rome that values good produce and properly labeled provenance, but this group is microscopic. By and large, most city dwellers are content to eat second rate food as long as it is cheap, convenient and abundant.*

Local farmers are among the unfortunate victims of this reality, so in order to raise Rome’s awareness of Lazio’s farmers and their goods, Gabriele Bonci’s pizza by the slice place Pizzarium is going vegetarian for the entire month of July. No capocollo. No prosciutto. No tripe. “The only animal products we will serve are mozzarella and some other cheeses, hen’s eggs and fish eggs. We will also make vegan things,” Gabriele told me. No.au, another Bonci joint will be presenting a new vegetarian menu in July. Pizzarium will put the spotlight on produce beginning Monday July 1, wile no.au will present their new offerings later this month (the official launch will be announced on their website).

Look for the best and greatest summer produce Lazio’s farmers have to offer like zucchini blossoms, eggplant, bell peppers, tomatoes, arugula and so much more. And continue to support local producers by visiting Terra Terra, the Città dell’Altra Economia, the stalls with green banners at the back of Mercato Trionfale, Palatium and Enoteca Provincia Romana. Bear in mind that most farmers’ markets close or operate on limited schedules during July and August.

*And I would add that almost no one–regardless of their interest in food–wants to confront the conditions of migrant and seasonal agricultural workers in the world. Who wants to pay the real cost of food calculated after those who grow and harvest it are being paid a proper wage?