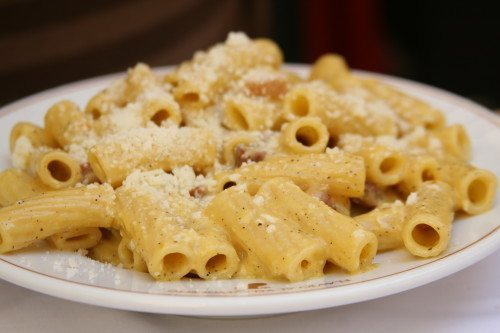 Flavio De Maio, a tech executive and enthusiastic home cook turned professional chef, opened Flavio al Velavevodetto in Testaccio after a 7 year tenure in the kitchen at Felice nearby. Since striking out on his own in 2009, Flavio has earned a reputation as a master of the cucina romana and is known for his beautifully balanced local dishes.

His secret for pasta classics like Cacio e Pepe, Gricia, and Ajo, Ojo, e Peperoncino is in the liberal use of starchy pasta water, which acts as an emulsifier in some cases and as a method of marrying flavors in others. In this week’s NYT Magzine, Mark Bittman shares Flavio’s recipes (full article here), so you can reproduce them at home. For the scoop on Flavio’s spectacular Carbonara, however, you’ll have to wait until Tasting Rome is published next year:)