Skip to content
Home/Late Night Snack at the Fatty Crab, NYC
Previous Next 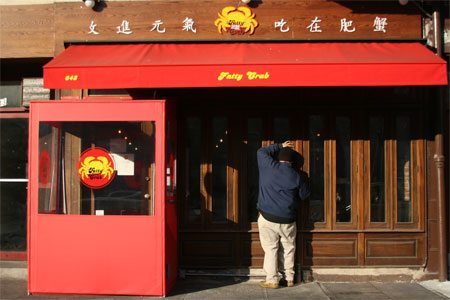 This past weekend, after a very pricey and barely filling (but incredibly delicious) meal at the brand new Recette in the West Village, I visited the Fatty Crab for dessert. Mind you, this is after eating 10 dishes and ending with a deconstructed s’more at Recette. Calling what I ate at the Fatty Crab dessert might be a stretch, but there was sugar in the ribs marinade. I guess what I’m trying to say is, after dinner we were so hungry we ate again.

The Fatty Crab is the (self described) “funky southeast Asian joint” on Hudson Street in the West Village. I like the food here alright, though I find it slightly silly that they serve PBR Tall Boys. It makes me wonder if the entrance to the Fatty Crab doubles as a teleportation station to Williamsburg or the LES. But I digress. We ordered the steamed pork buns and Heritage Foods pork ribs. All that fatty, porky goodness washed down with twenty-four ounces of that hipster brew was enough to fill us up.