Skip to content
Home/The Baguetteria In Parioli, Rome
Previous Next

The Baguetteria In Parioli, Rome 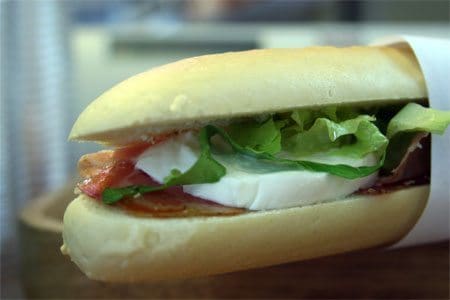 Last week, @passerotto tweeted about La Baguetteria, a bakery in Parioli serving fine cured meats and cheeses on French bread. The photos on the shop’s website looked tempting. I was intrigued. I tend to avoid the neighborhood like the plague, what with all the SUVs and spoiled 16-year-old pariolini whose idiotic parents gave them cars, and iPhones, both of which they operate simultaneously. But I’ve traveled greater distances in more dangerous conditions for a sandwich, so I hoped on my bike and made the trip, successfully dodging the cars that seemed intent on running me down. I ordered a “number 1”, prosciutto crudo di parma with mozzarella di bufala DOP and lettuce. The fillings were top notch, but the baguette wasn’t spectacular. It fell short in the aroma department and the crust (or lack thereof) was a huge disappointment (damn you Régis Colin for spoiling me!) but I’m not one to let a sandwich go to waste…

You can read @passerotto’s review (in Italian) here.