Said and the Last Chocolate of the Season 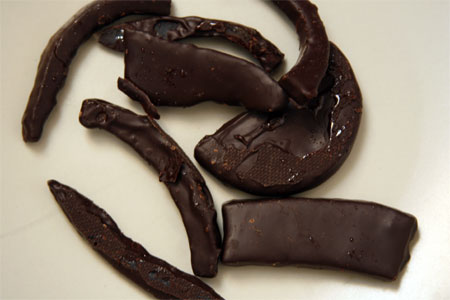 In Italy there are laws and there are rules. Laws may be ignored, overlooked, or selectively enforced. Rules, however, are fastidiously respected, particularly in the gastronomic sector: don’t put parmesan on spaghetti con le vongole; don’t mix meat and fish, unless at a blowout wedding feast; don’t drink beverages that are too hot or too cold; and mind the seasons. This last one is pretty broad concept and encompases chocolate consumption which, according to many in Italy, should come to a close as the weather gets warmer, thus ushering in gelato season. I tend to agree. While in December, I can dig into a huge bar of chocolate without giving it a second thought, come May, the thing melts, gets everywhere, and stains clothing. But beyond that, it just doesn’t feel right. There is something unnatural feeling to me about eating chocolate once it gets hot (unless in gelato form). So I biked over to Said in San Lorenzo yesterday for my last chocolate of the season. It was too hot out to get a big hunk so I settled for some scorzette, candied citurs rinds and orange slices covered in dark chocolate. They were a happy union of two winter specialites, chocolate and citrus. Candied citrus, in particular, is a product of Italy’s deep south and my location for the next five days.