Caffè Propaganda Opens Near the Colosseum 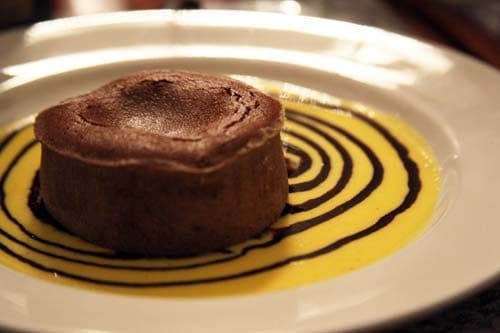 Molten chocolate cake…zzzzzz…oops dozed off and woke up in 1997.

It has taken me a full week to properly write about Caffè Propaganda, the bar/cafe/restaurant/cocktail bar/pricey macaron dealer/wannabe Parisian bistro that opened near the Colosseum on November 17. The place has generated more buzz than any other place in Rome I can remember. This is due mainly to the cast of characters involved: the beloved Chef Arcangelo Dandini, well-respected Pastry Chef Stéphane Betmon, fancy owners, a PR firm, a killer location, and a clientele that eats up trendy with more gusto than actual food. A recipe for success? So far, so good. The place has been packed and has garnered many positive reviews (though I can’t say this is one of them).

I visited for brunch last weekend with Mamma Parla and my friend John. We arrived at 1pm and were shown to our table near the kitchen. From there, I had a view over the entire dining room, a stunning space channeling early 20th century Paris. Pretty. But random.

Now what can I say about the meal? I think my comments to Eater are pretty accurate. Dishes were chronically underseasoned and only the eggs cooked with tomato and mint resembled anything particularly brunchy. (In Rome, the word brunch is applied to any prix fixe or buffet weekend lunch and has little to do with the traditional definition of the word.) The service was a hot mess and there were a bunch of casually dressed investors (?) with meagre forearm strength awkwardly bussing tables and generally causing confusion on the crowded floor. So at least there was some comic relief. The meal was relatively affordable at €25 for 4-courses. I would happily have paid more for some salt. 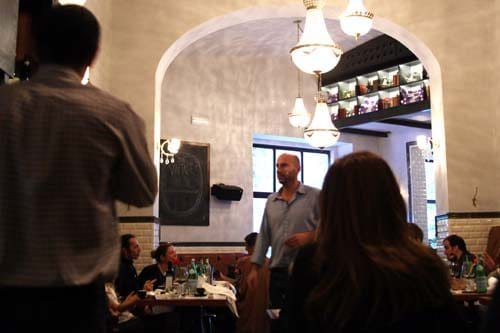 I’m sure the food and service will improve, but what really needs work is the business model. Caffè Propaganda is trying to be everything to everyone, it seems. In a way it reminds me of the nearby OS Club. During the week, Caffè Propaganda serves Roman classics, sandwiches, salads, super fancy desserts, macarons. There is brunch at weekends. The place is always open, though good luck trying to find out what they serve when. In what seems to be an unwritten rule in Italy, the company website is still a work in progress, more than 2 weeks after opening. But even more confusing are the prices, which are all over the board, ranging from €2 for a single macaron to €16 for tripe. Tripe!!! First courses are a bit more reasonable at around €10-12 each. Desserts are €8-12.

It’s hard enough running a successful restaurant with a well-conceived dining concept, much less a business with a vaguely defined one. But since I have 0% understanding of how or why Roman restaurant economics work (they seem to defy logic), maybe they’ll pull it off.

If things start to tank, however, they can always hock a few speakers. The music is so unbearably loud I developed tinnitus during the two-hour meal. The press release actually gives credit to one of the investors, dj Giancarlino, for the playlist. This amuses me.

Maybe I’m being too harsh on the place. It just opened, after all, so the food and service get a pass. But unfortunately that is not where the problem lies. The whole concept is just so boring. Hasn’t hype over clearly defined substance been done before?