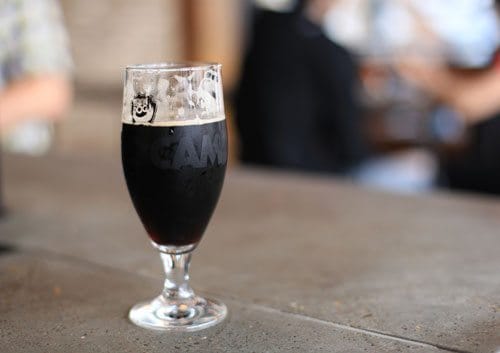 The BrewDog Camden website proclaims their December 2011 arrival added “a much needed craft beer injection to an area that’s typically associated with a twisted mix of indie drinking dens, chic VIP venues and mental aslyums.” This is more than just marketing hyperbole. Craft beer bars in Camden aren’t exactly a dime a dozen. Indeed, most pubs in London are content to serve Magners with ice. It’s ok if the thought of watered down industrial cider makes you vomit a little. Let it out.

In London, a handful of pubs do it right. The Rake in Borough Market and Mason & Taylor in Shoreditch are certainly at the top of the heap. And now BrewDog in Camden has joined the pack, peddling their own beers and a supporting cast of others, mainly from the UK and the US.

The independent Scottish brewery does both large and small batch beers with a focus on ales and IPAs. I drank their delightful Libertine Black IPA this afternoon and enjoyed the bitterness and piney aromas lent by the Simcoe hop. The staff was super friendly and knowledgable and willing to answer questions posed by drinkers of all experience levels. As long as BrewDog snubs cider and ice I’ll be going back for more.