Skip to content
Home/Blue Hill at Stone Barns
Previous Next 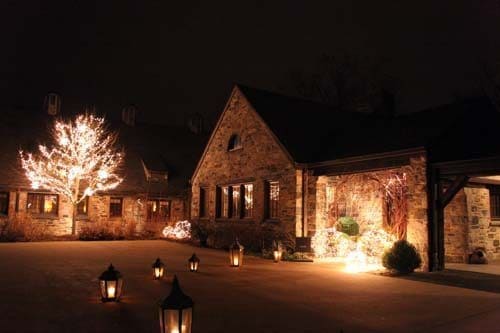 It happened again. Right out of the gates, just a couple of weeks into January, I had what will certainly be the meal to beat this year. The scene of the crime was Blue Hill at Stone Barns, Dan Barber’s farm to table restaurant, where most of the ingredients that go into the dishes are from the property surrounding the dining rooms; others come from small farms nearby. The wine list, which is by far the most cosmopolitan element of the restaurant’s offerings, features plenty of bottles from New York. The beer list is sensational and favors the Northeast.

Mom my sister and I arrived at Blue Hill after dark, so we didn’t get the full affect of the farm and its surroundings, but the setting was spectacular nevertheless. The path from the parking lot rises up towards a large stone archway, which gives way to a courtyard surrounded by solid stone edifices. The café, farm shop, teaching space, and kitchen all face onto the wide-open courtyard, which was still illuminated for the holidays. 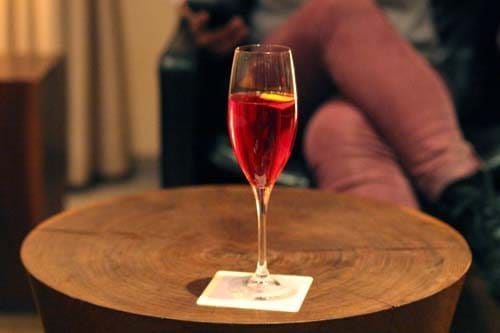 Upon entering the inner sanctum, the first space one encounters is a small bar with a glowing fireplace. We were drawn in by the warmth and had an aperitif by the fire. Mamma Parla had a glass of Macari Sauvignon Blanc “Katherine’s Field”, while I had the “Beet It” cocktail, a blend of beet vodka, orange-tarragon syrup and cava served in a Champagne flute.

Sufficiently warmed up, we entered the main dining room, a space whose height was broken up with exposed steel beams. In the center of the hall, a table held a basket full of eggs and various topiaries. 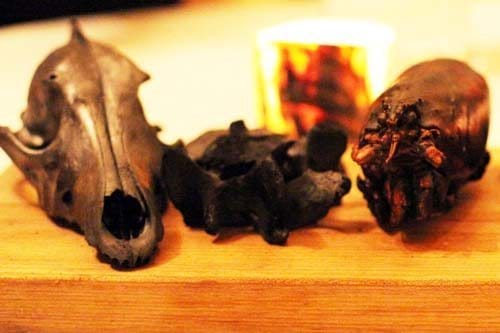 Biochar presented to the table.

The meal began with a steady stream of snacks, beginning with raw and crunchy starters, then moving on to more hearty and unctuous bites. Carrots, radishes and cauliflower came impaled on small black pikes. Carrot puree and a radishes with butter were next. Then smoked kale and potato chips skewered with sage. A “burger” and “sushi” saw meat and fish replaced with beets. House cured bresaola, speck and coppa impressed. “Face bacon” (thinly sliced crispy pork jowl chips) was a revelation. This was followed by pork rinds, sweet potato donuts, fried fish balls, pig liver pate sandwiched by chocolate wafers, pretzel with pork fat spread, and marrow served in the bone.

Once the parade of amuse-bouches had concluded, the 8-course menu commenced; Blue Hill at Stone Barns serves tasting menus only and at dinner one must choose between 5-, 8-, and 12-course offerings. We paired the first few courses with Weingut Jäger Riesling Federspiel Steinriegl, the middle courses with Blue Hill Red Winter Wheat beer and the Berkshire pork dish with R. López de Heredia Viña Tondonia Riserva Rioja. 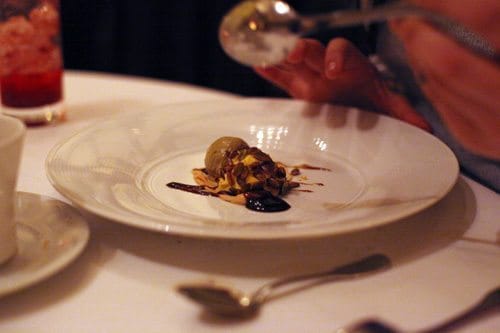 We began the meal with the winter fruit and vegetable salad, a mosaic of seasonal produce sliced super thin and dressed with mushroom gelee and sun choke vinaigrette. Next was a brioche toast with kale marmalade and ricotta that had been made minutes before. This was followed by cabbage that had been roasted on the grill outside, one that is fed by biofuel including charred bones, corn cobs and other organic refuse from the kitchen. A segment of the charred cabbage was accompanied by crème fraiche and caviar. A bizarre and massive bass face followed. It was presented with chopsticks and we fished out the cheek and head meat first with utensils, then with our fingers. The final dish was Berkshire pork loin and belly with salsify. Perfection. There were two desserts: Pumpkin seed oil and squash ice cream and Cheese soufflé with figs.

The dinner was splendid from start to finish. The service was professional and polished but the atmosphere was utterly laid back. One diner wore a Yankees hoodie and was greeted with hugs from the staff. I was right at home in jeans and Chucks. We were encouraged to eat with our hands. The food was creative but not over the top or pretentious. In many ways, the warmth of Blue Hill and the execution of the dishes reminded me of meals at Noma. Like Redzepi’s food, Barber’s creations lead one through the rich flavors of his territory, producing a cuisine has no precursor but derives its authenticity from the very land from which it springs.