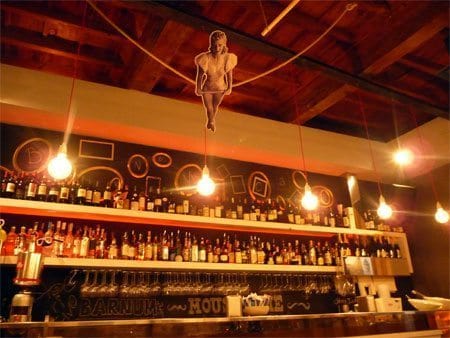 Today my friend Diana got to town and we went for a long walk in the centro storico with the goal of doing some banking. I am completely incapable of making it to banks when they are actually open, always arriving the second they close for lunch, so we had some time to kill and took a walk to Via del Pellegrino to check out the fairly new bar Barnum Cafe. I had swung by last week after it was suggested to me by my bookseller at the Libreria del Viaggiatore next door. I had been pleasantly surprised to hear Method Man (my third favorite member of Wu Tang Clan) blaring as brownies and tea were served. I vowed to go back when I had the chance, so when the opportunity presented itself today I seized it.

Diana and I found a table and two soft chairs beside the bar in the front room. A pumpkin and onion torta rustica and fudge brownies tempted us from the nearby counter. We opted for tea instead, as we had already had pizza al taglio and cookies from the Kosher Bistro en route to the bank. Diana chose Lapsong Souchong, a smoked black tea that tasted like sweet pork broth (in a good way). My spice infusion was very gingery with a subtle hints of cinnamon. Lovely.

Barnum Cafe has free WiFi, serves tea, drinks, and light meals, and functions as an art gallery for photo exhibitions. The atmosphere is young and laid back and the only real flaw today was the conspicuous lack of the Wu. Instead, what I assessed to be an iTunes 90’s music shuffle played over the speakers. I heard some titles I haven’t listened to in over a decade (for a reason), but provided this was just a one-off occurrence, I would certainly return. But the next time I’d leave room for dessert.