Skip to content
Home/Armando Al Pantheon in Rome
Previous Next

Claudio and his cookbook, which recounts the history of Armando al Pantheon through recipes.

Claudio Gargioli is in his kitchen six days a week, buttoned into his graphite hued chef’s coat, occasionally emerging to greet regulars. You can see him from the dining room, moving around a broad iron stove, tossing pasta in warped aluminum pans and seasoning pots of gently simmering meats. Since Claudio’s father opened his eponymous trattoria, Armando al Pantheon, in 1961, three generations of Gargiolis have transformed this small family business into a Roman landmark known for its soulful renderings of the cucina romana. These days, you’ll find two generations at Armando; Claudio is joined by his brother Fabrizio and daughter Fabiana. 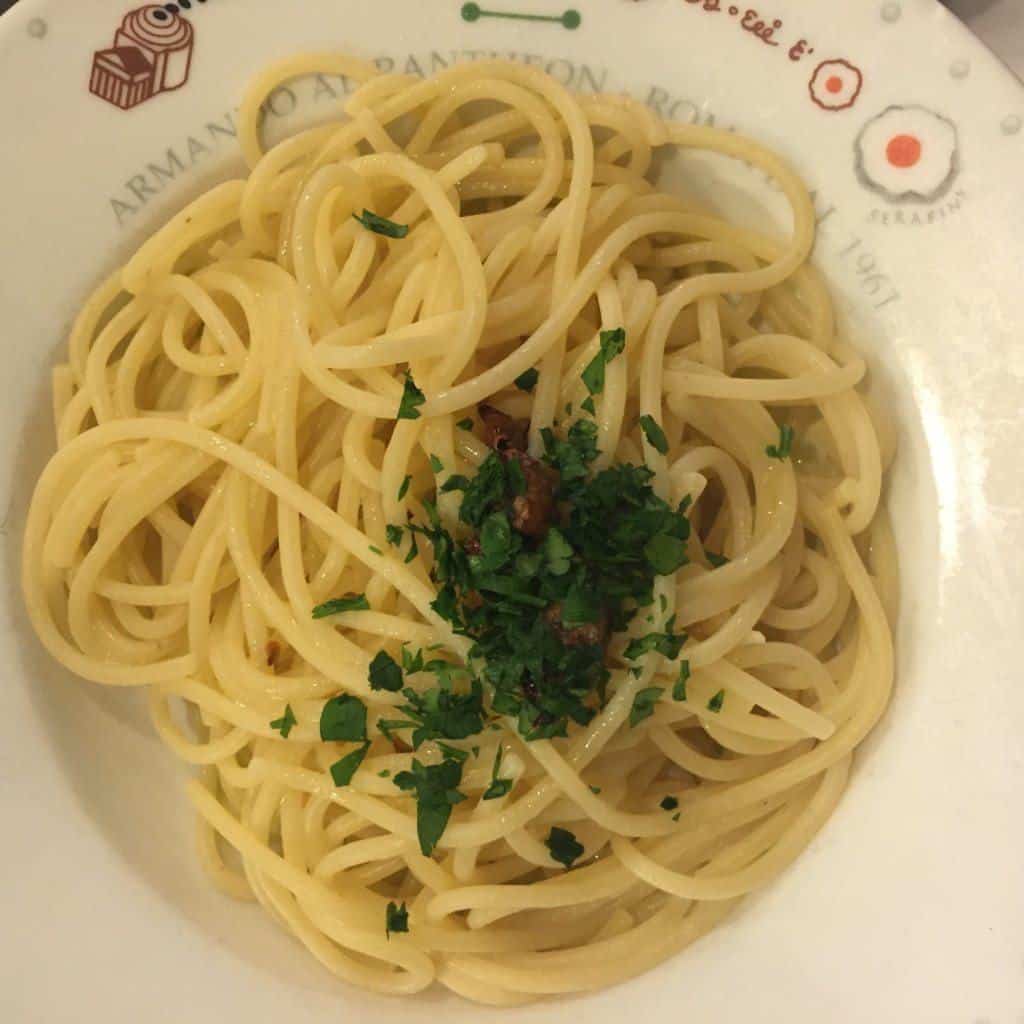 When I sit in the dining room twirling Claudio’s comforting spaghetti ajo, ojo, e peperoncino around a fork, the place, like the hulking mass of the neighboring Pantheon, feels constant, impervious to change. But in Rome, romantic illusions rarely match reality. When Armando opened his doors nearly six decades ago, there was paper on the tables, cork on the walls, and sawdust on the floor. The dining room, the same narrow space it occupies today, was divided in two distinct zones. Along the wall now lined with banquettes and tables clad in crisp linen, they served a simple, seasonal menu of hearty local fare: bowls of pasta and chickpeas in a seasoned broth, veal medallions with peas, bitter dandelion greens sautéed with garlic. Along the opposite wall stood tables where workers would come to drink, bringing their own lunches with them. “We went through 500 liters of jug wine a week in those days, and plenty of beer, too,” Claudio tells me in the corner booth near his kitchen. “Sardinian day laborers—shepherds for hire—would come in groups of ten and wouldn’t leave until everyone had bought a round.”

I love listening to Claudio recount the evolution of the place, from its humble origins as a neighborhood hangout to its current incarnation as treasured trattoria. He’s a natural storyteller and eager to narrate an epic tale featuring a vivid cast, from local laborers and butchers to journalists and Swiss nobility. Even Jean-Paul Sartre makes a cameo. The story’s stage, sadly, has vanished forever. Rome is a different place altogether and in spite of the cherished stereotypes that envelope the Italian capital and its cuisine, a series of traumatic economic crises, coupled with major demographic shifts, have taken their toll, changing the city; what, where, and how much we eat have changed along with it. I’ll let Claudio tell you how it used to be:

When this place started it was a bit ambitious. I mean, when my dad took it over, it was a place that aimed at being a proper restaurant, but the people that had run it until then hadn’t been able to do that, mainly because there were several good competitors in the area like Nunzio al Pantheon, Romagnolo, La Rosetta or Archimede who already offered the same dishes at restaurant level. Also, this place was limited in space so it didn’t really have the opportunity to offer a restaurant service.

My dad decided to clear most tables of tablecloths, napkins and so on, he only left a few tables already prepared

[on that side] and cleared all the others [on this one]. He took all those people who couldn’t afford to go to a restaurant but who could pay for a dish, like workers, builders, all those who would go for lunch around midday. At the time, there weren’t any fast food places, so these people usually had a sandwich from home. Basically they would come around for some pasta with chickpeas or another first course and then they would eat the food they had brought with them after that.

They would drink the house wine and lots of it. We went through 500 liters of jug wine a week in those days, and plenty of beer, too. The beer was popular thanks to Sardinian shepherds. There were the shepherds’ brokers in Piazza della Rotonda, who came around to find shepherds for the day, but not everyone was hired. These Sardinian day laborers—shepherds for hire—would come in groups of ten and wouldn’t leave until everyone had bought a round. We used to work with these people on the side with the cleared tables, while on this side we kept the tables set to give a better impression. At that time Armando was glorious, I mean there was sawdust on the floor, it was the old style osteria.

At that time, my dad used to make very simple dishes because Armando had always been a minimalist in the kitchen, with clean flavours, thanks to the products which were different from those we have today. I mean they were more natural, more seasonal. You couldn’t find artichokes, broccoli or puntarelle out of season, you could find them only when it was their time. So dad made menus which were first of all limited, basically he made roast veal and potatoes. Katie, let me tell you how he would roast it in the summer. He would send it to the bakery on via dei Pastini because it was too hot in our kitchen in the summer. He would just prepare the meat and either my brother or myself would take it over there and then go fetch it when it done cooking in the bread oven. There were always some potatoes missing because the bakers would swipe a few!

Armando would make veal medallions with peas, chicken stew with white wine – “chicken with white wine” was the only thing he could say in English. He made steaks that he bought at the butcher. Dad bought 4 steaks for service, maybe 5. We had a butcher La Cardellina nearby in Largo Torre Argentina. They had phenomenal beef. Veal, on the other hand, we would get at Feroci. He cooked osso buco with mushrooms and peas. If he made fish, it was salt cod on Friday. On Saturdays he made Roman style tripe. Oxtail I don’t remember him making because he never had time to focus on long-cooked dishes. He made milk fed veal intestines, coratella, suckling lamb. He would make lamb in various ways: alla cacciatora, allo scottadito.

He would go to Campo dei Fiori at the last minute to see if he could negotiate a deal for dandelion greens and other typical seasonal vegetables. Armando used to go to the market for 2 reasons: so he could get cheap produce late in the market hours, but of course so he could be using the local food he knew how to work with. That’s not the case anymore. That mentality and ritual of going to the market has almost completely vanished. The produce sold in the center isn’t genuine anymore and the quality has declined. Campo de’ Fiori was a spectacular place at one time. There were artichoke vendors beneath Giordano Bruno who would shout “come by 2 artichokes before you die” [this makes more sense in Roman dialect!] Now all those great historic vendors have vanished. We still get things from Mauro in front of the Farnese cinema in Campo de’ Fiori. He delivers to us. The rest we get from the market near my house on the Aurelia. Do you remember the antipasto bar we used to have? Sometimes I regret taking it out because it was a way to show off all these great vegetables of Rome. There were 10 different things every day. It was time consuming but I miss that part a bit.

Anyway, back to Armando. He was always very conservative about spending because even though he wanted to serve restaurant level food, our format was more like a tavern where food was expected to be economical. And that’s how it was when Armando opened his place. Then I got involved. I was studying Political Science at university and I was doing a course at IBM and one day my dad called and said a server no-showed. Well, not just a server, the only server. He asked if I would come over and help and since then I never left. Look, if we were Armando al Prenestino, I never would have come to help. But at the Pantheon, that was something different and I was attracted to the place. Plus our roots are here. I was born on Via dei Balestrari, dad was born just off Via Giulia, our family has bee in central Rome since at least the 1700s when they arrived from Massa Carrara and remained. The Pantheon feels like ours.

For more on Armando al Pantheon and the important work the Gargioli family is doing today to preserve the traditions of the past, check out the March issue of Saveur.