Skip to content
Home/Meat Binge in Antalya
Previous Next 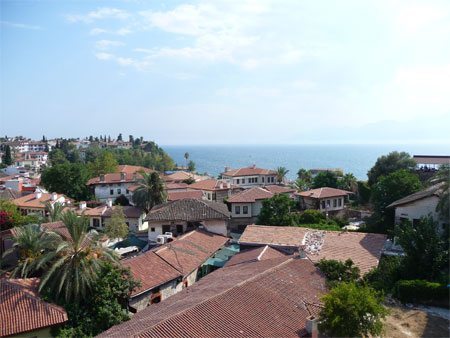 I arrived late Thursday night in Antalya after a hellish 14 hours of travel. By midnight most everything in town was closed, save for the miraculous Dönerciler Çarşısı where lots of kebab and kokoreç (seasoned lamb intestines) stands have been put under one glorious roof. I had a köfte sandwich (a meatball sub, hold the sauce and cheese) with an ayran (yogurt drink; no beer is sold at Dönerciler Çarşısı) and hit the hay.

The next day I set out exploring the city, making my way for the Cuma Pazarı (Friday market) where seasonal produce like melons, watermelons, grapes, peaches, plums and figs were sold in the packed streets west of Murat Paşa Camii in the new city. I stocked up on figs and headed over to the nearby Güneyliler restaurant for a good but not life changing lahmacun. The best thing about the place is that when I walked in with a bag of figs, they were wisked away immediately and put in the fridge to chill while I ate. The worst thing about Güneyliler, they dumped lemon scented sanitizer on my hands immediately after I was done. Bringing my tea to my lips after this was unpleasant.

After some more exploring and a nice run in Karaalioğlu Parkı I dined at the Castle, a pub with excellent köfte (these lamb meatballs are a daily ritual for me) and frosted mugs of Efes. It took literally forever to be served because the place was so busy but it was definitely worth the wait.

The next two nights were dedicated to meat, as well. On the third evening, I went to Çakırlar, an area just northwest of Antalya where you grill your own fresh meat at the table. And I mean fresh–lamb carcasses hang in a refrigerated case near the road and it is butcherd to order. We had thinly sliced lamb that was grilled tableside with peppers, tomatoes and onions. The meat was delicious but the real highlight were the mezes: hibeş (crushed garlic mixed with red pepper and tahini) and Erzincan tulum peyniri (cheese from eastern Anatolia that is aged in goatskin). I could eat either of these everyday.

The last supper was…surprise…köfte! When I asked advice on streetfood in Antalya, Rough Guide colleague Terry Richardson recommended son Çare Köftecisi, praising its köfte sandwiches (it’s the only thing they serve) and fresh salad bar where you can stuff your bread and meatball sub with raw peppers, onions, tomatoes, arugula and salad. It lived up to all my expectations and was cheap, to boot. Just 5TL (2.50 euros) for a huge sandwich and an ayran. A fitting end to a köfte fueled break in Antalya.