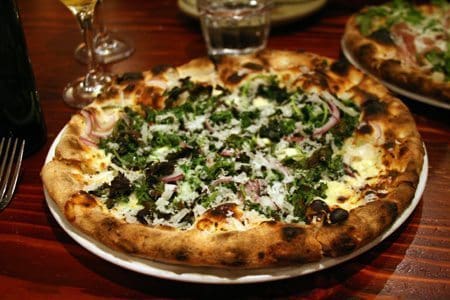 Wild nettle and pecorino pizza at Pizzaiolo in Oakland.

Without a geographic specification, the word pizza is completely generic. Of course, it conjures up the notion of sauce and melted cheese on dough. But there are exceptions that defy this definition and the texture of the crust, size and shape of the pie, cooking methods, and toppings can vary wildly from place to place. In Italy, for example, we have the crispy, thin crust Roman style and the thick-crusted, elastic centered Neapolitan variety. There are also untold variations of focaccia and pizzette, which can vary from city to city and region to region. 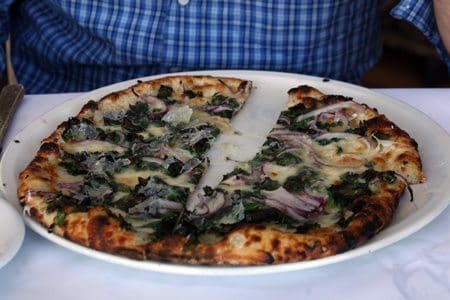 Things are equally diverse in the States, where major styles include New York, New Haven, Chicago, and California, just to name a few. On a recent trip to the San Francisco Bay area, I tried ten different pizzas, mostly California style, and they ranged from outstanding (Zuni Cafe’) and excellent (Pizzaiolo) to greasy (Cheese Board Collective) and uninspiring (Delfina). 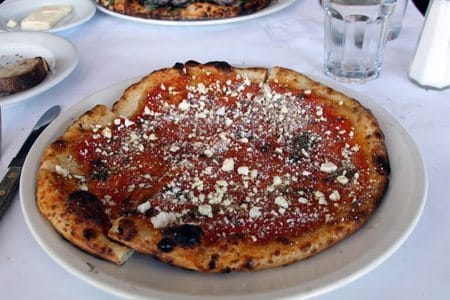 Zuni Cafe’ had the best pizza all-around, offering subtly a raised outer crust that was toasted outside and spongy inside. The texture and flavor are indebted, in large part, to the wood burning oven. The toppings were wild nettles and pecorino and tomato and ricotta. Neither of these would be typical Italian pies, but that is sort of the point. Just like any food, pizza was bound to change to adopt to its surroundings and local customs and at Zuni Cafe’, the pies embody the freshness and seasonal nature of California cuisine. 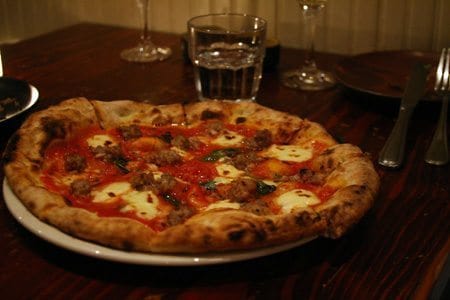 At Pizzaiolo in Oakland, the pizza is a collision between Neapolitan style pizza and California cuisine. The thick rim evoked memories of Di Matteo or I Decumani, but the toppings were straight off local farms. The blended styles resulted in quite tasty pizzas, though the fiori di zucca starter served with sliced tomatoes and onions was too oily and could have done without the tomatoes and onions, frankly.

Heirloom tomato pizza at The Cheeseboard Pizza Collective in Berkeley.

I suspect this is going to be an unpopular assessment but the two pizzas I tried at The Cheeseboard Pizza Collective in Berkeley were greasy. Both had two types of cheese on them, which brought an unpleasant oiliness and undeniable heaviness to the pizza. The ingredients and philosophy of The Cheeseboard are no doubt admirable, but I couldn’t get past the streams of oil that gushed out when folding a slice.

Back in San Francisco, Delfina is a pizzeria with lots of Italy-inspired starters. The mozzarella in carrozza with anchovy butter was oily — fried foods do not have to feel heavy! The pizza had a tasteless swollen rim that didn’t live up to Delfina’s rep as a great pizza destination. Next time, I’ll just head to Zuni Cafe’.