Last night I had the experience of a lifetime, a late-night visit to a cheese producer in Corato (BA) in Puglia. The Alta Murgia plateau situated just east of Bari in central Puglia is known for its amazing cheeses: Burrata, Ricotta Marzotica, Manteca, and Canestrato Pugliese. Since 1946, the cooperative Caseificio Pugliese has been promoting and producing high quality typical dairy products made from cow’s, sheep’s, and goat’s milk delivered seven days a week from the farms of its 120 co-op members. It is weighed (in kilos!) and tested for contaminants and acidity before being sent to its respective destination. During the day, the Caseificio works primarily with sheep’s milk, while they work well into the night (in fact, I visited from 3-5am) making cow’s milk products. 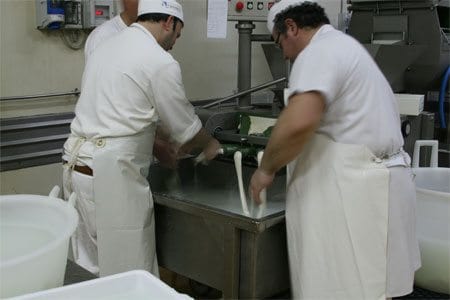 From the outside, the Caseificio seemed completely silent and still and gave no hint of the intense labor that was going on within. Inside, there are two main production rooms. The first I encountered was where strands of mozzarella were being extuded from a machine as men worked braiding them into treccie. Nearby, a man worked hand-shredding mozzarella that he soaked in cream and later stuffed into little handmade mozzarella sacks to make my all time favorite fresh cheese: burrata. 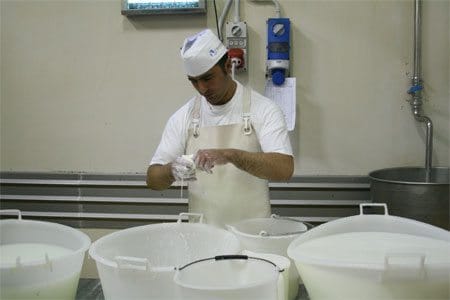 While all of this is going on, the mozzarella balls that were made earlier in the night (midnight until 2am) were packaged by weight and labeled for delivery to area supermarkets, one of the 22 Caseificio Pugliese shops in Puglia, Rome, Milan and other Italian cities. Due to high duties, the caseificio no longer exports their production to the US. 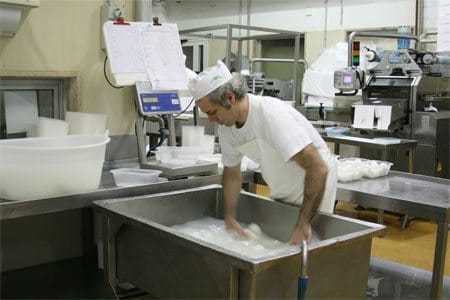 The adjacent room was dedicated to ricotella (cow’s milk ricotta) production. Large stainless steel tables held hundreds of round plastic containers into which men ladled the curd skimmed off large basins of whey. Once the containers were full, they were left to stand and then round labels were placed on the exposed ricottella before they were shuttled to the proper cart for delivery. 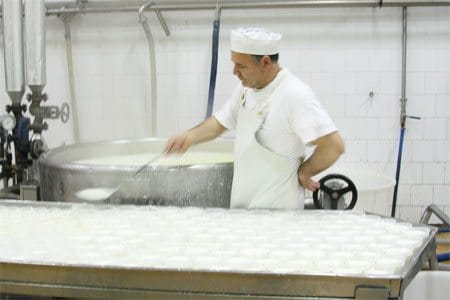 Startig at around 4am, the ricotta room became the venue for Caciocavallo Silano D.O.P. production. Caciocavallo Silano is a semi-hard cheese made from raw cow’s milk. It has been awarded D.O.P. status (like an AOC appellation) and can only be made in 5 regions of the Italian south. The name derives from the method of drying the cheese by tying two together and hanging them “a cavallo”, on horsbeack. They come in a variety of sizes but the form is always the same, one large ball and one small one. 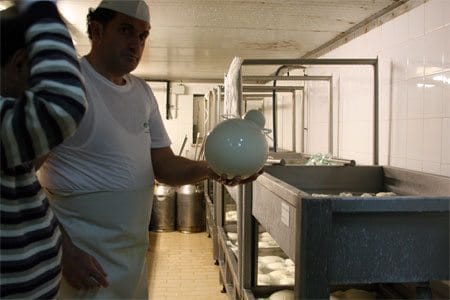 The visit to Caseificio Pugliese was absolutely incredible. It was amazing to see some of the most important prodotti tipici of the Alta Murgia being made so casually right before my eyes, just as they have been (by hand) for hundreds of years. Witnessing such a clear devotion to quality and tradition is something I will never forget.