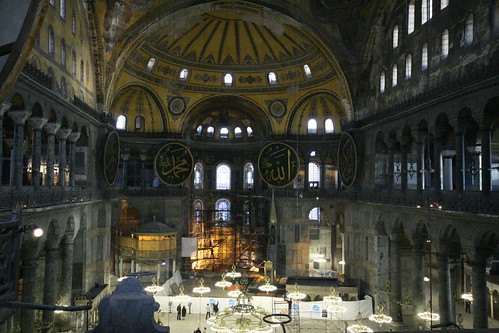 As 2010, Istanbul’s year as Europe’s Cultural Capital, draws to an end, I thought it was time to rework my guide to the city. (The fact that half a dozen friends are traveling there in the next couple of months provided additional motivation!) What follows are links, resources, and suggestions for getting the most out of Istanbul.

Where to Stay: Ditch the Sultanahmet district and head for Beyoğlu, a more liberal and lively part of town packed with restaurants and well connected to the rest of the city. I recommend these accommodations: House Apart, Hotel Marmara Pera, Grand Hotel de Londres, Tomtom Suites, and Lush. More in this post.

What to eat: Istanbul has tens of thousands of restaurants at all price points. The inexpensive and moderately priced places offer the best value. Read a round-up of my favorite places to eat here. Istanbul Food and Istanbul Eats are two other excellent resources for eating in Istanbul. Both, incidentally, can arrange gastronomic tours of the city.

What to see: With the exception of cruisers, visitors to Istanbul generally stay for 3-4 days. Considering how vast the city is–really the size of the place is staggering–a few days isn’t nearly enough to scratch the surface. 3-4 weeks would barely do the trick. That said, if you who have limited time, this is how I suggest you spend it:

Day 1. Sultanahmet – Topkapı Palace, the Blue Mosque, Hagia Sofia, the Hippodrome, the Basilica Cistern, and the Archeological Museum:
This is a lot of dense territory to cover, so I recommend spending an entire day in Sultanahmet, visiting a few sites in the morning, breaking for lunch, and finishing the rest once you have had food and a rest. The place I recommend for lunch is an Istanbul institution and is a short walk from all of the sites in the area so you can play it by ear and see when you are hungry, head over to the restaurant, then pick up touring afterwards.

I suggest tackling Topkapı Palace first. It’s a great intro to Ottoman architecture. Be sure to visit the Harem. The nearby Archaeological Museum is amazing and certainly worth a visit. But after the majestic Topkapı Palace, any normal human suffers major museum fatigue. I suggest holding the Archaeological Museum in reserve for later. Instead, walk to the Blue Mosque, visit Hagia Sofia, the Hippodrome, the Basilica Cistern, then, energy permitting, hit the Archeological Museum. Throw in lunch whenever you feel hungry.

One worthwhile detour is to go to the end of the hippodrome then down the hill behind it. You will see the massive walls of the stadium, which now support a school and some government buildings. You may also wish to pop into Nakkas carpet shop, where you can ask to go beneath the store to visit an ancient cistern.

The place I recommend for lunch is Tarihi Sultanahmet Köftecisi. It is located at Divan Yolu Caddesi 12. Beware of imposters. There are several other restaurants with the same name on the street (don’t know how they get away with it!) but the real deal is at number 12. Order: izgara köfte (grilled lamb meatballs), piyaz (white beans), and irmik halvası (sweetened semolina). The place doesn’t serve alcohol but they do have sodas and ayran (a yogurt drink that pairs perfectly with grilled meats). 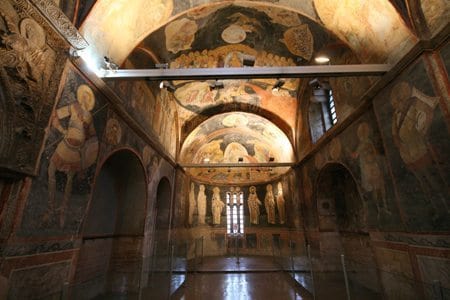 Day 2. The Spice Market, Sinan’s Mosques, and the Chora Museum:
Poke around the Spice Market for a while. Check out the famous coffee roaster Kurukahvecisi Mehmet Efendi, located just outside the arcaded gallery. You can buy beans to bring home. Just opposite this shop is a hole in the wall cheese shop with the best eski kaşar (a pungent aged cheese). Inside the L-Shaped covered part of the spice bazaar things get a bit hectic so hold onto your belongings. I much prefer perusing the stalls outside where produce, cured meats, fish, meat and olives are sold.

After the Spice Bazaar, find Rüstem Paşa Camii nearby. This mosque was designed by Sinan, the Ottoman answer to Michelangelo. Arm yourself with a good map and hike around Istanbul’s hills to seek out his other masterpieces, including the newly restored Süleymaniye Camii, and Şehzade Camii.

Ending the Sinan tour at Şehzade Camii puts you on the border of Fatih. Grab a bite nearby at Fatih Karadeniz Pidecisi, a place specializing in Black Sea pide (sort of like a pizza or a calzone, depending on which style you get). If you are interested in food and don’t mind seeing whole animal carcases, poke around Fatih a bit and check out its butchers and food shops.

Next, hop in a taxi (5 minutes) to the Chora Museum, aka Kariye Camii, one of the most spectacular sites in Istanbul. Now a museum, the building was a Byzantine church, then a mosque. The ancient Byzantine mosaics and frescoes are amazing and the best preserved works from the period in the city.

There are usually a few taxis hanging around outside the monument. You can grab one of them to take you back to the hotel. If there aren’t taxis, have someone in the café opposite the church call one for you. 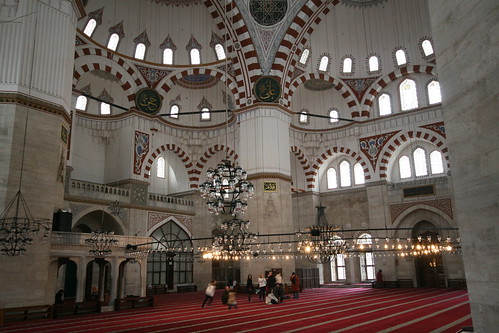 Day 3. Trade & Commerce— Kadıköy & The Grand Bazaar
Take the ferry from Karaköy, Eminonu, or Beşiktaş to Kadıköy. There are frequent departures and you can purchase tokens for boarding the ferry at the dock (1.75TL). When you land in Kadiköy, delve into a food-lovers dream where vendors and ingredients from east, west, north, and south mingle, selling rare herbs, seasonal fruits, and decadent desserts. The neighborhood is pretty self-contained. Spend some time strolling the fish and produce markets and grab lunch at Çiya Sofrasi on Caferağa Mah. Güneşlibahçe Sokak (https://www.ciya.com.tr). There are actually 3 Çiyas—two Çiya Sofrasis and a Çiya Kebab—in the same block. This cafeteria-like joint is considered one of Istanbul’s best restaurant. The owner Musa is among the most important food historians in Turkey and he tracks down vanishing recipes and replicates them here.

Leave room for at least two desserts—one at Çiya (candied olives and mini eggplants with kaymak) and a Kup Griye at Baylan. Kadikoy is a great dessert destination. You can read about the zone’s sweet tooth (in Italian) here or pick up National Geographic’s 500 Food Journeys of a Lifetime, where you will find my chapter on Kadıköy’s sweets culture in English.

Hop on the ferry back to the European side. Be sure to take it to Eminönü. From Eminönü you can hop on the tram or cab it to the Grand Bazaar (Kapalıçarşı/Grand Bazaar stop).

The Bazaar is huge and overwhelming and you have to wade through a sea of humanity to get to the best parts. The longer you spend at the Bazaar the more the specialty shops selling rare spices, teas, ceramics, and antiques emerge from the chaos. It may take a bit of patience to ignore the persistent vendors but it is certainly worth it. If you are in the market to buy, remember to haggle!

My favorite place in the Grand Bazaar is the Cevahir (Jewelry) Bedesten. The shops there sell lots of gorgeous new and antique jewelry. But there is more than just jewelry there. You can find items in amber, glass, ivory, gold, and all sorts of luxury goods including old books, paintings, and icons. This calm oasis is a great place for a tea. Grab one at Bedesten Café, easy to find once you get to the compact Cevahir Bedesten. 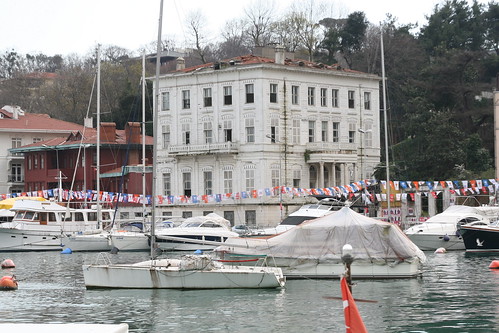 Day 4. The Bosphorus and Its Villages:
A Bosphorus cruise is a must for visitors to Istanbul, though I recommend taking a shorter itinerary, rather than the 6-hour round trip ordeal touted by many companies at Eminönü. Instead, get the 10:35 am boat from the Eminönü dock. It makes a bunch of stops along the way, as it zig-zags between Europe and Asia. Hop off at Sarıyer (about 1 hour), a port on the European side, then slowly make your way back down the Bosphorus over land and check out the gorgeous waterside villages along the way.

It’s not a bad idea to have your hotel double check the departure time and to arrange for tickets in advance. The one-way ticket costs around 13TL, though the hotel may add a service charge. It pays to arrive around 30 minutes before departure to board the boat early and find a seat with a good view.

After landing at Sarıyer, grab a tea at one of the waterside cafes near the water and enjoy the scenery. Afterwards, grab a taxi (readily available around the port) and take it to the Sabanci Museum set in the former residence of one of Turkey’s richest family.

Next, cab it down to Rumeli Hisarı. This is the Ottoman fortress that was built in the 15th century and served as a staging area for the 1453 conquest of Constantinople. You can hike around the archaeological site a bit, then head back down to the Bosphorus road and grab a bite at Iskele, a fish restaurant spectacularly sited between Rumeli Hisarı and the second Bosphorus Bridge.

After lunch, you can stroll down the Bosphorus to Bebek, then Arnavutköy, old fishing villages with great atmosphere and old wooden Ottoman era houses. You may with to grab another Kup Griye at Baylan in Bebek, or a drink at Abracadabra in Arnavutköy. Both are situated on the Bosphorus road and the latter has great views over the water.

From Arnavutköy hop in a cab to Ortaköy. Now you are at the so-called First Bosphorus Bridge. Ortaköy was once a little village that has now been fully absorbed into the greater metropolitan area. The traffic and crowds get more intense here, as it is not far from the heart of town, but it is still a nice place to stroll and shop before cabbing it back to the hotel.

Women have to cover the heads and legs in mosques. Throw a scarf in your bag and take it with you everywhere just in case you encounter a mosque you want to visit.

If you want to hire a guide for some or part of your time in Istanbul, I can highly recommend the services of Context Travel. They offer private and semiprivate itineraries of the city.

If you are out in the Beyoğlu district at night, don’t flash jewelry and be aware of your personal belongings. The area has undergone considerable gentrification over the last decade, which has made some areas safer than others.

Check out this guide to Istanbul dining, updated in July 2011.