A Brief Guide to Dining in Palermo 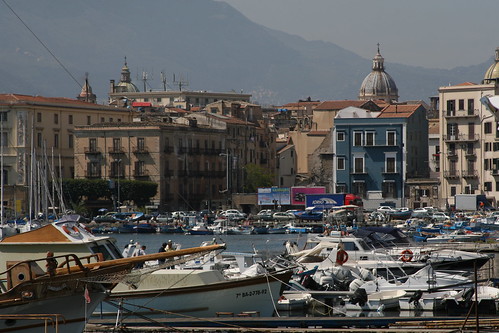 After five days in the fatherland, I can officially say that I’m full. Palermo is a place where it is unthinkable not to indulge. There are fried things everywhere, the fish is amazingly fresh, and you just can’t duplicate those amazing ricotta-filled pastries off the island. It would be a shame to pass any of those things up, not to mention all that fantastic streetfood.

To put the tiniest scratch in Palermo’s gastronomic surface, you’re going to need at least a week. Nevermind the fact that most people devote less than 24 hours. They are missing everything. And don’t go planning a million day trips (a half-day in Monreale is a must, however). Stay put, get into the groove, and live Palermo. Of course you can’t do or eat everything on a single trip, but here is my advice for a crash course in Palermo’s cuisine. 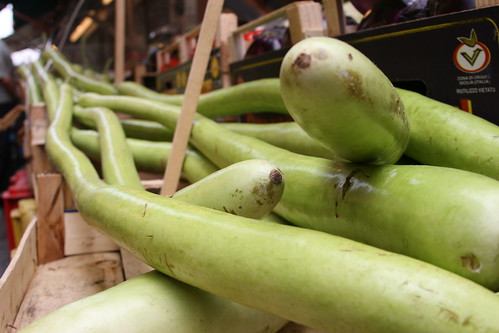 Cucuzze, a type of zucchini, in the Capo Market

Visit the Capo and Ballaro’ markets
While the Vucciria is home to the most famous market in Palermo, I don’t much care for it (read: super touristy), preferring the Capo and Ballaro’, two of my favorite places on earth. They are large, rambling affairs where vendors sell produce, meat, and fish. Butcher shops display the skinned heads of recently slaughtered animals in the manner of North African and Middle Eastern bazaars; fish are stiff with rigor; produce is ripe and (mainly) local. You’ll also find stalls selling Palermo’s street food there (see below).

Setteveli
When visiting Monreale with public transport, take the AST bus from Via Calatafimi (at the moment the 389 bus is suspended). Beforehand, take a detour to two nearby pastry shops, Cappello and Massaro. Their setteveli, seven-layer cakes, are insane. 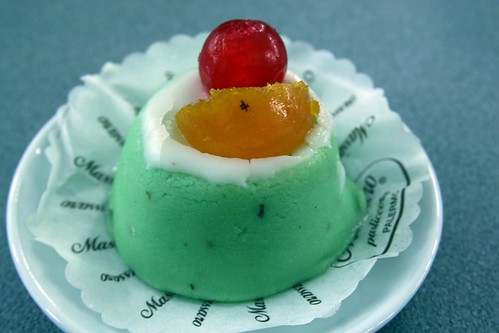 Ricotta things
I love ricotta in all its forms: as stuffing in ravioli, in its salted and grateable version, and especially as the sweetened filling of desserts. When I visit Palermo, I usually stay near Mazzara, which does delectable ricotta-filled cornetti (as well as every other imaginable pasty), but I have been known to travel across town to Oscar on Via Migliaccio for my absolute favorite cassata. Costa is also quite awesome and I would’t turn down a cannolo from Alba.

Eat whatever’s in that basket
In Capo and Ballaro’, as well as on random street corners and in alleys, you will see men with wicker baskets. These baskets are draped with fabric to keep their contents warm-ish and relatively fly-free. Walk up to the basket man and order frittola, a sandwich made with the meat bits (cartlidge, fat and tendons, too) he plucks from his container and stuffs into a roll. If you are watching your carbs, you can get the chunks in a paper cone. There is just one rule: don’t look too closely at the frittolaru’s fingernails. Nothing good can come from that. 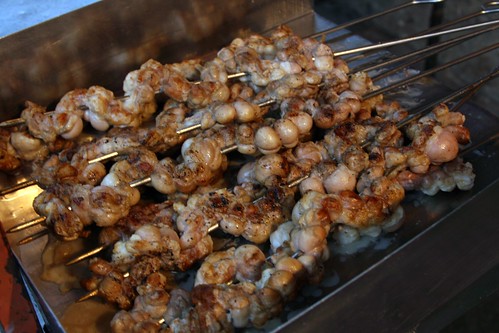 Skewered stigghiole on Via Colonna Rotta.

Stigghiola
Stigghiole are lamb or calf intestines that are charcoal grilled on the street at night. Starting at around 5pm, the stigghiolaru will set up shop, dropping a slab of fat over the smoldering charcoal to make smoke, which will attract customers. He will then prepare the innards, placing them on wooden chopping blocks to skewer them before they go on the grill. He will then chop the cooked stigghiole on the same chopping block in what is just one of the many wonderful examples of cross-contamination Palermo’s streetfood scene has to offer. Stigghiola stalls are everywhere.

Pane ca’ Meusa
Sliced sesame seed rolls are filled with slices of spleen cooked in lard. Even if you are squeamish, please give this sandwich a chance. Pane ca’ meusa is served all over town but the place that does it best is aptly names Pani ca’ Meusa di Porta Carbone. It is located on Via Cala and you can grab a sandwich and a beer and sit at the tables on the sidewalk that look across the street to the port and beyond to Monte Pellegrino. 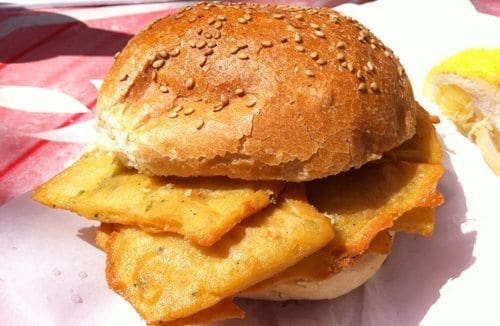 Pane con panelle
This is another classic streetfood that you can find absolutely everywhere. I am partial to the stall in Piazza Ballaro’, where the vendors (a husband and wife team, I believe) drop panelle into a bubbling cauldron of oil to order. They stuff each sesame seeded roll with 5-6 of the piping hot chick pea fritters and can even add stuff a few crocche’ (potato croquettes) in there with them.

Street Fish
Not far from Teatro Politeama lies Borgo Vecchio, one of the liveliest parts of central Palermo. Here there is commerce day and night, and the zone is constantly abuzz activity–howling street vendors touting their goods, kids playing in the street (a bit unsettling), and whole families whipping by on scooters (minus the muffler). At Da Michele on Via Principe di Scordia, the main axis of Borgo Vecchio, food is grilled out on the street. The other night, I visited Da Michele. I bought fish at the nearby stall, watched it be gutted and cleaned, then carried it across the street to a large stainless steel table. There, the fish were dropped in a bloody pool (from the meat Da Michele also offers), salted, and thrown on the grill. All I can say is I’m glad they cook the hell out of their fish or I most certainly would have an illness right now. Maybe I don’t really recommend this place. But do go have a look. If you want to have charcoal grilled fish out on the street, hit up Da Salvo in Piazza Kalsa. 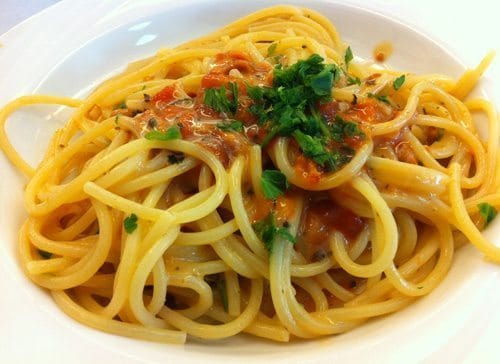 Piccolo Napoli
And if you want an amazing fish meal in a clean, enclosed environment, head to Piccolo Napoli. This family run establishment serves outstanding fish dishes in Borgo Vecchio. It is open Monday to Saturday for lunch and Thursday to Saturday for dinner. Booking is essential on the weekends, as palermitani flock for polpo bollito (boiled octopus), spaghetti con i ricci (with sea urchin roe), and involtini di spatola (filets of scabbard fish rolled around breadcrumbs, pine nuts and currants). Save room for a few buccellati (the original fig newton!) and cassata brought in from Pasticceria Oscar.

Zia Pina
Of course one must visit the Vucciria during the day (come back at night for stigghiole!), though I would discourage eating on the main square. Instead, head to Zia Pina on Via Argenteria, midway between the market and La Cala. Claim a plastic table and chair outside, load up your plate with antipasti, and order one of the daily pasta dishes and some grilled fish. This is as close to home cooking you are going to get without an invite to a casa palermitana, though do try to score one of those while you’re at it. 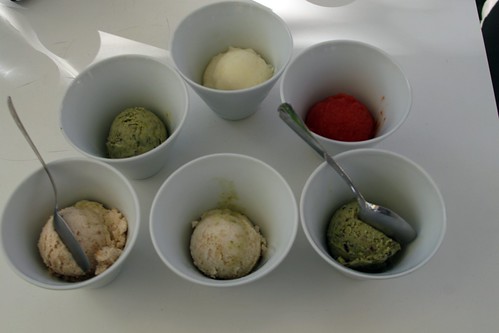 Le Cremolose
After all this you’ll need a palate cleanser. Head to Le Cremolose, a kiosk in the park beside the Giardino Inglese for some…cremolose, a sort of sorbet meets granita. Three flavors cost €4 with table services and you can even get the slushy treat stuffed into a sweet brioche for a little extra. Their almond and pistacchio are two valid reasons to drop everything and move to Palermo.

San Francesco Sucks
Not the Saint. The Antica Focacceria di San Francesco. This place is as boring and awful as it is famous. I won’t bore you with all the reasons AFSF sucks, but let’s suffice it to say that you can eat better everywhere else. I’ve dedicated a brief post to my disdain.

A map with tagged suggestions

View Palermo in a larger map